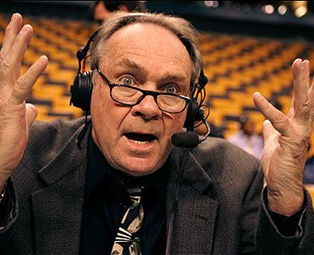 One of the great things about DirectTV, League Pass and other forms of satellite is that you get to watch practically every team in the Association on a fairly regular basis. But as DeNiro cooly stated in Heat, “there’s a flip side to that coin” — you have to listen to some pretty awful broadcasting from the local TV stations. Below is a list of the guys I think are some of the absolute worst in the business (in no particular order)…

The Cleveland Cavs guys: One call sums up their work: “Lebron…looooves…levitation!” (shudder). Seriously, what does that even mean? Lebron loves levitation?! I first heard this ridiculous call sometime last year after James took off from outside the key and threw down one of his patented Statue of Liberty dunks against the Bobcats. I had to rewind the TiVo a few times just to make sure my ears weren’t playing tricks on me. I’m getting angry just thinking about this.

The Miami Heat guys: I heard them refer to a typically nasty Dwyane Wade dunk as a “cracker” last year. No word of a lie. The fact that main play-by-play guy Eric Reid’s voice makes him sound like some sleazy lounge DJ doesn’t help either.

The Toronto Raptors guys: Living near Toronto, I get a lot of Raptor games on the tube, which means I get an earful of Jack Armstrong and Chuck Swirsky. Every season, I am led to believe that a routine Morris Peterson baseline three is Sick, Wicked and NASTY!!! Pray for me.

The Hornets guys: Bob Licht and Gil McGregor are some of the most shameless homers around. They have absolutely no problem referring to the New Orleans Hornets as “we”, and heaven forbid should a call go againts the Hornets, they won’t drop it for a good two quarters. I’ve had to put the TV on mute a number of times during their broadcasts.

The Knicks guys: The Knicks just can’t seem to do anything right. Walt Frazier has done more damage to the English language than anyone but Rickey Henderson.

Tommy Heinsohn: You either love him or hate him. Most hate him. And with good reason. Oh, and the 72 year old Tommy Heinsohn has a MySpace page. Frightening.