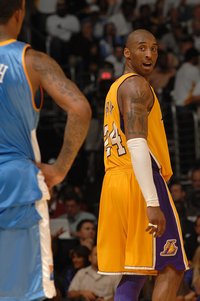 In a lot of ways, this weekend’s slate of games will determine whether or not we should keep paying attention to the first round. A number of teams have the golden opportunity to turn their series into dogfights, or simply start planning their summer vacations.

Hornets @ Mavs, Game 3: Chris Paul and Byron Scott vs Jerry Stackhouse and Avery Johnson. 15 Rounds. Who ya got?

Spurs @ Suns, Game 3: Do methodical, robotic teams get fired up by inflammatory comments made by the enemy? We shall find out soon enough.

Lakers @ Nuggets, Game 3: My favorite part of Game 2 of this series, was J.R. Smith talking trash to an absolutely en fuego Kobe … and getting punked on the ensuing play.

Bryant went around Smith and scored on a layup (plus the harm) to cap off his spectacular 49 point and 10 assist night. Uh, J.R., might want to stop talking for a while, champ.

Cavs @ Wizards, Game 4: Despite DeShawn Stevenson’s best attempts to make his team nearly unlikeable, I think we’d all like to see this series go the distance.

Alright, enjoy the games everyone. And try to get some fresh air, will ya. It’s beautiful outside, and you look mighty pale.