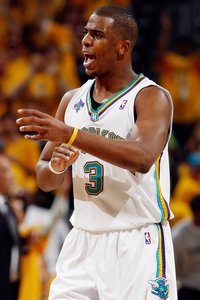 We have a pair of Game Two’s tonight, and at least one of them should be more than watchable.

The Pistons seems to have learned their lesson from the First Round; ever since Game Five of the Sixers series, they’re actually taking Playoff games seriously from tip off. This, of course, is very bad news for the young and inexperienced Orlando Magic.

Spurs @ Hornets, Game 2: The New Orleans Hornets absolutely beat the tar out of San Antonio in their series opener, and yet, it doesn’t feel as though the defending champs are in real danger of getting unseated.

Most expect the Spurs to even up the series tonight, fly home, and take care of business in front of their fans.

Still, what happens if Chris Paul goes nuts tonight (as he is wont to do), and Duncan struggles again, and the Hornets put the Spurs in an 0-2 hole? Time to get nervous? You bet.