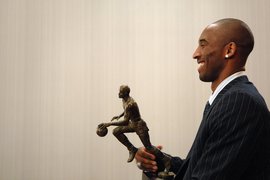 Pistons @ Magic, Game 3: This one has all the makings of a classic Detroit letdown game. I can see it now: The Pistons, who have been in control of the series, arrogantly strut into Dwight’s house, give a half-assed effort, and let the Magic win a game. Afterwards, Rasheed dismisses the loss in typical ‘Sheed fashion, and everyone has a good laugh because, well, this is what Detroit does.

The Magic have plenty of motivation going into tonight’s battle; for one, they’re fighting for their postseason lives, and they know that the League certainly won’t be doing them any favors on close calls.

Jazz @ Lakers, Game 2: Kobe will be presented with the MVP trophy tonight in front of the home crowd, and that should make for a great scene. It should also give the Lakers an emotional boost to start off the game.

Over on the Utah side, the Jazz will try to dominate the glass again, while hoping that shots for Carlos Boozer and Deron Williams will fall. Of course, all of that might not be enough to steal a game in L.A., but it’s generally never a good idea to take a Jerry Sloan-led squad lightly.