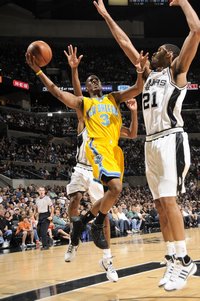 Cavs @ Celtics, Game 2: LeBron says he’s not beating himself up over the cringe-worthy Game One performance, because in his mind, he can’t possibly play any worse. And he’s right; that was an aberration as Jake wrote following the series opener.

While James is expected to have a much stronger outing, so should Ray Allen and Paul Pierce, who were both absolutely miserable in Game One. If they make their shots, there’s no reason to believe this series isn’t shifting to Cleveland with the C’s up 2-0.

Hornets @ Spurs, Game 3: Is this really happening? Are the defending champs on the ropes, thanks to a team led by a 23-year old wunderkind? Believe it.

Almost incredibly, San Antonio will be playing for the Playoff lives tonight. Lose Game Three, and it’s pretty much a wrap.

Logic dictates that Duncan and co. should win in front of their home crowd tonight, and I think they will, but keep in mind that this Hornets team hasn’t made any sense whatsoever from Day One.