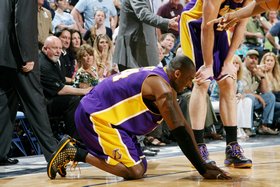 That seems like the appropriate word for tonight’s festivities; just ask Larry Bird and Kevin McHale.

Cavs @ Celtics, Game 5: You all know what happened the last time LeBron James found himself in a Game Five, on the road, against a team that was supposed to beat his Cavs.

Realistically, no one expects James to re-create the heroics in Detroit last year, but the Celtics should be plenty worried tonight. Boston may be perfect at home so far in these Playoffs, but they have not performed the way a 66-win team should.

While they’re still favored to win the series, Boston continues to struggle offensively as a unit, and those dreaded questions about Kevin Garnett’s nagging tendency to shrink away from the moment in the fourth quarter remain unanswered.

Jazz @ Lakers, Game 5: Bad back or not, Kobe is going to suit up tonight. As if there was ever any doubt. How effective he’ll be remains to be seen. More to the point, it’ll be interesting to see if he sticks to the team game should the Lakers fall behind in the late stages of the battle.

The Jazz know that all of the pressure in on L.A. tonight, and they have gained quite a bit of confidence from the last two victories. With a banged-up Bryant, and their shots starting to fall with a little bit more consistency, Utah has every right to feel good about themselves. Here’s to hoping they don’t feel too good.