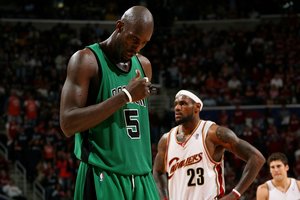 With the way things have gone so far in these Playoffs, we might as well just skip tonight’s festivities and move right on along to Game Seven. But there’s a reason they play the games, and we watch. You just never know.

Boston @ Cleveland, Game 6: They may have the homecourt advantage, and they may have LeBron on their side, and they may be going up against a team that can’t handle playing on the road in the postseason; but without Boobie Gibson, the odds aren’t in the Cavs’ favor tonight.

Now, I like my superstar athletes to have confidence (even a bit of arrogance never hurts), but I couldn’t help chuckling after reading the following quote from Bron-Bron following the Game Five loss:

What, are the other LeBrons showing up on the court with you now, Mr. James? Actually, that might not be such a bad idea.

Lakers @ Jazz, Game 6: The games in this series have been competitive and entertaining, but both teams have done what they were supposed to do: Hold serve on their home floor.

It’s the broken record theme of these Playoffs. But someone has to blink at some point. They gotta. Please?