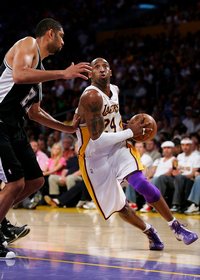 OK, so we didn’t get the “fun” matchup that everyone seemed to want in the Western Conference Finals. New Orleans vs. L.A. for the crown out West is still a year or two away. Regardless, the matchup that we did get has all of the makings of a classic.

The Spurs are old, they’re universally hated (which I still don’t quite get; must we hate all that bores us?), and unless someone proves otherwise, they remain the team to beat. The Lakers, meanwhile, are in the midst of a surreal season (even by their standards), and their biggest rival of the last decade stands between them and a return to the NBA Finals.

The storylines between these two old foes will be hashed and re-hashed ad nauseam throughout the series, so let me spare you for now. Instead, let’s focus on the matchups. Talent-wise, you could make the argument that the Lakers have more of it, but in terms of experience, the edge has to go to San Antonio.

Game One jumps off from Staples tonight, and much like last night’s game in Boston, it’ll be interesting to see who’s more ready to play: the team coming off an emotional and grueling win, or the one that’s been kicking back and relaxing for days.