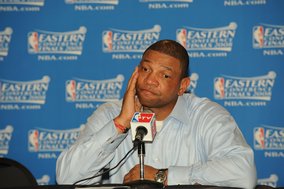 Paul Pierce says that, heading into Game 5, the Detroit Pistons have the edge. And he’s right. In this ugly-as-hell series, momentum has shifted from one team to the next from game to game. Trust me, it’s not as exciting as it sounds.

Though Detroit may have “the edge”, it is the Celtics who are favored tonight. They have been nearly invincible at home during the postseason (and all year really), and all of the pressure will be on them this evening.

(And it wouldn’t shock me in the least if they dusted off some of their old homecourt-advantage tricks to get back at their foes.)

KG knows his team needs to regain their defensive dominance, and he has plenty to be motivated about after Jason Maxiell’s monster block in Game Four.

For the Pistons to win another one in Boston, their version of The Big Three must come through in a big way. That’s right, Rasheed, I’m looking at you. Feel free to show up in this series, big guy. Seriously, it’s not too late.