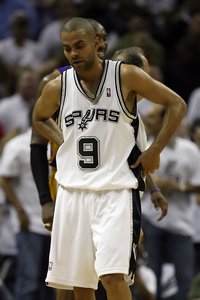 Lakers vs. Celtics, in the NBA Finals. It began as one of those “Can you imagine if that happened?!” fantasies for most fans and observers of the League when the Playoffs started. And yet, here we are, just two games away from it becoming very much a reality.

Game Five of the Spurs/Lakers series goes tonight in L.A., and the Lakers will be looking to send the Spurs home for the summer. They are favored, and rightfully so.

The reality of things is that L.A. has proven itself to be a better team than San Antonio – faster, younger, more talented.

But, but, …, but this is still the Spurs we’re talking about here. The defending champs. The team you can never truly count out until the final buzzer sounds. I fully expect tonight’s game to be ultra-close. San Antonio has too much pride, history, and veteran experience to go down without a fight.

The Spurs are going down, eventually, but it will not be easy.