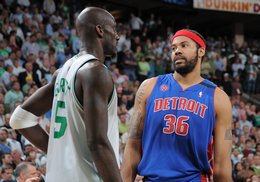 The C’s are one win away from a long-awaited return to the Finals, where their oldest rivals await them. Considering the way they’ve performed on the road during this postseason, though, a Game Seven back on their homefloor seems almost predestined.

The Pistons got some good news today, as Rip Hamilton confirmed that he’ll be in the starting lineup (bum elbow be damned.) How effective he’ll be remains to be seen, but his presence alone should give the team a nice emotional lift.

Boston has to like the way Ray Allen was able to regain his shooting touch in Game Five, and they’ll look for him to continue bombing away from the perimeter.

(If Shuttlesworth is able to go for 25 + tonight (with the usual contributions from KG and Pierce), the Celtics might not have to face a decisive game back in Beantown. Though, Chauncey Billups – injured or not – figures to have a major say in that.)

A part of me wishes for the Pistons to lose tonight, just to see Rasheed’s sure-to-be classic reaction.