Would You Watch a Reality Show Starring Gilbert Arenas? 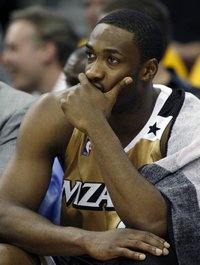 Because the Wizards star might just be getting one.

After becoming a hit in the world of blogging, Gil is thinking about trying his luck at television next. Arenas phoned in to a DC-area radio show recently, and discussed the possibility of having a camera crew film his antics.

“Ya know, so, I’m thinking about it, because, ya know, I have players like Nick [Young], who’s goofy, so we can do paintball shooting and see who can get hurt on the grotto jumping into the pool…”

It’ll be just like his blog, except with moving pictures! Make it happen, reality television producers.