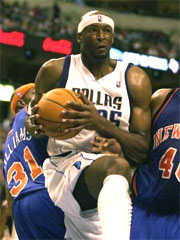 This ran on the old Slamonline after Game 2 of this year’s NBA finals. The Mavericks were up 2-0, and Erick Dampier had somehow neutralized Shaq.

The Diesel has made periodic habit of refueling his quotable think-tank by guzzling Erick Dampier hatorade, which, unlike gasoline, appears to be far too accessible. So, last summer, when he called Dampier “Ericka”, nobody questioned him because he’s Shaq and his jokes are the law of the land.

(In that vein, the poor journalist he clowned after game 1 is now married to the lay of the land…) Point being: If Shaq verbally attacks, your rep takes a questionable offensive foul to the face.

If you asked the hardcore NBA fan that judges players by the money they make, Dampier’s emasculating connotation always made perfect sense; $7.6 million and rising yearly isn’t deserved for a chronic underachiever that isn’t even starting. The jocktastic earn-your-money manliness that typifies the L’s hard workers and fan favorites is a pipe dream. These financial digits combined with some other less impressive numbers force many to, come tax time, suffer bile-inducing acid reflux.

Moreover, if every player that underachieved after receiving a big pay-day received similar criticism, Dampier would join Brian Grant, Chris Crawford, Jim McIlvane, the immortal Jon Kontract and a host of others in the WNBA’s inaugural hall of fame class. (I didn’t include any Knicks on that list because a run-on sentence wouldn’t have been appropriate.) And, as we all know, a player who succeeds only when it is time for fat contract extension is the L’s version of a trophy wife. Austin Croshere meet Katie Holmes; Tim Thomas meet David Arquette; Antonio Davis meet Kendra Davis etc.

However, impressive running the floor and suddenly stellar on D(iesel), Dampier appears to be changing sexes before our very eyes. He’s not quite there yet, but this may very well be the very beginning of his arrival as a force; winning an NBA title by frustrating his biggest critic the first step toward his transcendent manscendence.

(Yes, ladies and gentlemen, Erick Dampier is on the cusp of helping Jerome Bettis, Burt Reynolds, Eddie Griffin and Triple H peddle Miller Lite to people lacking taste buds.) The second step is the obvious hard work and post-title rededication to his game that places him in the upper echelon of NBA bigs. Which brings us back to the nuts, bolts and killer bird-bees of the here and now…

Like Jaime Lee Curtis repeatedly beating the living snot out of Mike Myers in a Halloween flick, Dampier has reached the status of ass-kicking hermaphrodite. And a very important choice lies ahead.

To very loosely paraphrase Robert Frost as a Mavs fan: Two chromosomes diverged and hopefully the salary cap killer will take the road less traveled—the world is over 50% women. (Either way, the worst thing he can do is to stay where’s at and continue to disappoint during the regular season only to come up big during the playoffs because then he’d just be f—— himself.)

Hopefully he’ll dedicate himself to his post moves and defensive intensity in an effort to, among other things, shed the embarrassing “dual-citizenship” tag that has suddenly become him.

It would be a wonderful culmination to a surprising story if on the eve of next season (Halloween) Dampier will be able to trick opponents and treat Mavs fans with a newfound knowledge of self.

And the picture Dampier has of Dampier hanging in Dampier’s locker won’t look so foolish because Dampier will finally be what Dampier always wanted to be.