Your Chance to Play (NBA TV) Exec on Tuesday Nights 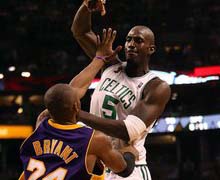 Starting next season, NBATV will allow its viewers to vote on which games they want to spend their Tuesday nights watching. As a certain hip-hop impresario might say, it’s time to Vote or Die! Or something.

Awful Announcing has the nitty-gritty details:

Every Tuesday during the 2008-2009 NBA Season is being dubbed Fan Night and votes on NBA.com will decided which game goes in the Tuesday night slot.

While it’s always good to see the networks give fans some sort of say in the programming, I fear this will turn into the debacle otherwise known as All-Star fan voting.

Admittedly, I won’t mind the endless stream of Laker games on Tuesday nights, but others might not necessarily feel the same way.