You’re Saying His Name All Wrong 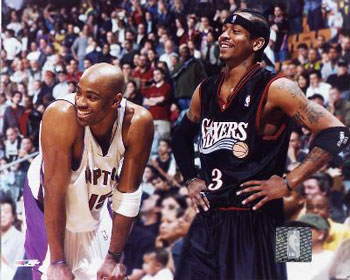 -Hilarious post from Dan Shanoff today. It appears that a cousin of Tim Donaghy’s emailed Dan and asked that he pass along the following public service announcement:

I just got an email from a cousin of Tim Donaghy (whee: exclusive!), who asked me to pass along the message to everyone that his family pronounces it “Don-a-gie,” with a hard-G sound (like “hoagie”), not “Don-a-hee” (like “hee-hee”).*

(This PSA is sponsored by Just Blaze and the good folks at Roc-A-Fella Records.)

-Speaking of Don-a-gie (yes, that’s how I’m going to start spelling his name from now on), the League is really giving him the shaft. They’re erasing all of his records.

-The NBA controls all of the data and won’t share it with their referees.

Another official said: “I’ve asked Stu, ‘For me to not know the stats, how can I improve? Show me the plays.’ He’ll say: ‘Your three seconds are low. We don’t know if you missed any, but you’re below average.’ Well then why do you say I missed them?

“By controlling the data, they control us.”

-According to a study by the Orlando Sentinel, the Magic will win more games if they move into a new arena. Color me sold.

-Sean Marks has a one-year deal with the Suns.

-Have you ever had the urge to re-live each basket that Allen Iverson scored against the Raptors in their classic 2001 Playoff matchup? Today, my friend, you’re in luck.