Buck of the People 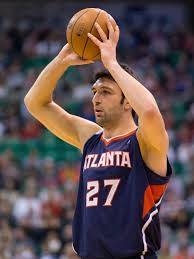 Within five minutes of when the Georgian behemoth walked into the Amway Center practice facility, at least a dozen people approached him to congratulate the newest Milwaukee Buck on his latest contract. Pachulia greeted everyone back with an enormous smile, a loving handshake and several hugs, too.

So, you can hate on Zaza all you want. Call him overpaid. Call him washed up. Call him past his prime. He doesn’t care what you think, he’s one of the most popular guys in the entire League.

His love for friendship and other positive relationships was evident in his free-agency signing this month. Pachulia decided to leave the Atlanta Hawks after eight years to return to his ’04-05 home in Wisconsin. Why?

“It’s like going back home,” Pachulia said. “I played there for a year, so I’m comfortable with the facilities and the people. It’s definitely going to be a good situation.”

But the people who Pachulia is joining in Milwaukee aren’t the guys that were with him back in the mid-’00s. He’s teaming up with his former Atlanta Hawks coach Larry Drew and now, potentially, his point guard Jeff Teague.

It’s also a close relationship that brought Pachulia down to Disney World in the first place.

“I’m here to watch Toko [Shengelia],” Pachulia said about his appearance at Summer League. “He’s like my little brother. We Georgians have to stick together.”

Shengelia, whose first name is actually Tornike, is about to enter his second season for the Nets. He appeared in 19 games last season during the team’s inaugural season in Brooklyn. Pachulia sees a promising young player.

“He’s been playing well, but he definitely needs to improve a lot,” he said of his close friend. “I think he can do something for [Brooklyn] next year.”

Whether going down south to take in some off-season ball or changing employers, relationships and friendly faces have kept Pachulia going and motivated throughout is time in the League. Now, it’s just a question of whether he and the Bucks can contend for the Playoffs next season.