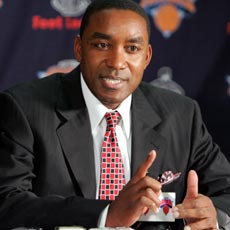 Told y’all he was smart.

MSG chairman James Dolan, in his first public comments since naming Isiah Thomas head coach of the Knicks, came out and said that Isiah’s job is safe until at least the last day of the regular season. I can only imagine the amount of joy this bit of news brings to Knicks fans everywhere.

Though I’m as guilty as anyone of taking shots at Isiah, I’m reasonable enough to recognize that all things considered, his coaching stint in New York so far hasn’t gone as horrifically as it could have. How’s that for a ringing endorsement?

In the Leastern Conference, the Knicks at 8-15, sit only 2.5 games out of a playoff spot. They have an All-Star in Eddy Curry; Renaldo Balkman has been a pleasant surprise off the bench; Nate Robinson, despite (ahem) lapses in judgment, has been solid; David Lee has doubled his scoring average; and Q-Rich, Steve Francis and Jamal Crawford have all been reliable contributors in stretches.

Now, despite having reached 35% of the victory total from last year (just over a month into the new season), this remains a very flawed team that’s probably not going anywhere. For now, mostly because management really doesn’t have that many other options, they’re not going to blow it up; they’re just going to wait until spring arrives to do it.

“I believe that we will be sitting here at the end of the season saying, ‘Obviously, we need to keep Isiah.’ I believe that, but I’m not committed to that.” (James L. Dolan)