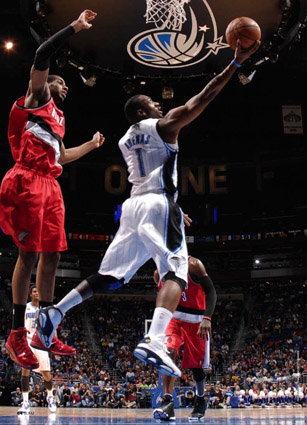 At first glance, you won’t notice anything peculiar about Gilbert Arenas. The artist formerly known as Agent Zero, once best known for his hilarious blog and endearing off-court hobbies, today is known mostly for being, well…just being. Formerly a Wizard, now a member of the Orlando Magic, when you see Arenas in the locker room, nothing jumps out. But then he lifts up his pants cuff and you get a glimpse of what’s beneath the surface: Funky socks have become a staple of his outfits. He’s a closet Craig Sager—polka dots, stripes, weird colors. It’s a direct correlation to his personality. He tells you what you want to hear on the surface, but he’s hiding a little bit of himself underneath.

Gilbert Arenas practices twice a day, every day. When he’s not at home playing video games or watching Modern Family or Jack Bauer in 24, he’s playing basketball. His arthritic knee is a hindrance, but what he’s really struggling with is beating the assumption that he’s never going to return to his career form.

“Sometimes you just have to put your best players on the court,” he says.

Without hesitation, he answers, “Yes.”

With the coach’s confidence and the right opportunity, Gil says he can be an All-Star again. He also thinks he can be the X-factor for the Magic this postseason. “If I’m played right, I could be,” he says. “I’m still dominant. You’ll have one of the most dominant players coming off the bench, but you have to use him.”

According to Gilbert, for him to play like Agent Zero, he needs more minutes.

“I’m never getting the touch or feel of the game of basketball. Most guys that come in as a backup, you’re coming in and just managing the game. Don’t do anything stupid,” he says. “He’s (Orlando coach Stan Van Gundy) told me to be aggressive, but still…this is how I felt. At one point it’s like, once I get out there, I know I have this short window. I can’t be mediocre; I have to be great in this seven-minute span. So I’m going out there and if I don’t make my shot, I’m like, Ahhh, I can’t shoot anymore. If I miss another one then it’s two missed shots.’

“I’m sitting there thinking, OK, don’t make any mistakes because any mistake could get you subbed quicker. So now I’m not being aggressive, I’m being passive, so I’m basically just out there, so he subs me even faster. It’s like a little circle.”

Van Gundy notes that in trying to spark Jameer Nelson, Arenas has been left searching for his groove. “The other decision we made after the All-Star break was that the guy we really needed to get going was Jameer,” says SVG. “That became my number one priority, so I want to pick up his minutes even more from where they are, so that makes it tougher on Gilbert. I understand the challenges he has, that’s why I’m not disappointed in him, I’m not upset at him. There’s nothing against him, he’s just in a situation right now where more minutes would make it better for him. But he’s got to pick up his efficiency in the minutes he’s getting and that’s not an easy thing.”

What may not be obvious is the turmoil going on in Gilbert’s head. He thinks he’s the best. He wants to be out on the court in the last five minutes of the game. He knows what he’s capable of. But he also knows he can’t “fuck this up.” Gilbert’s mentality works differently than most players, he says. It’s not easy for a competitive mind like his to sit on the sidelines, take a step back and watch from afar.

“I think two, three steps ahead of everyone else. I basically play chess on the basketball court in the last five minutes,” he says. “I’m a nervous wreck on the bench (during the last five minutes of the game). I just try to visualize what I would do. That’s just how I do it.”

“Most players can come in, bring their personality and try to be dominant, and I feel I can’t,” he says. “I feel I have a short leash because of my past.”

It’s not uncommon for NBA players to have some of their most intimate issues—from marital problems to custody battles—splashed across the internet and newspapers. Of course, in the ever-eccentric world of Gilbert Arenas, there are halftime subpoenas and allegations of $60,000 train sets and dead sharks. His nine-year, on-and-off, unconventional romance with his ex-wife was shaky to say the least.

“[She] tried to make everyone believe that I’m a bad father. The stuff you said is always in the paper and one day when my kids grow up, they’re going to ask me about this,” he says. “It’s weird because if you read everything she’s said, I’m this bad father that leaves them for dead, but on this end I’m a father who spends all this money on his kids. Well, pick one.”