Before They Were Giants 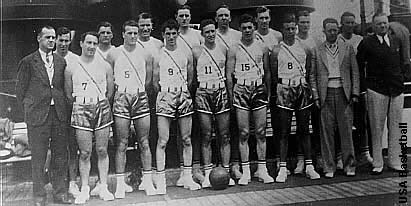 As the “Redeem Team” continues to plough through their Olympic agenda in reclamation of roundball supremacy, I would like to take a full timeout to pay tribute to the original cast of U.S. cagers that established our long-standing tradition of taking home medals (mostly of the Gold variety) from each of the 16 Olympiads that our men’s national team have competed in prior to Beijing. First, let me preface the roster of names with a quick backdrop of those early games.

Long before the advent of a trapezoidal lane or the signature orange and white-paneled FIBA ball, Team USA first got busy in the summer of 1936 on an outdoor tennis court lawn in Berlin, Germany, under the witness of the game’s creator, Dr. James Naismith, and the face of fascism, Adolph Hitler. At the time, basketball was approaching its 45th birthday and was still largely a laggard game, characterized by a center jump after each made field goal and devoid of Danny Biasone’s well-needed, activity-inducing invention of the 24-second shot clock.

Though basketball was initially demonstrated at the Olympics in 1904, it did not become a recognized medal sport until the Berlin games—an accomplishment that is rightfully credited to the dogged efforts of Forrest “Phog” Allen, the “Father of Basketball Coaching” and a former letter winner under Doc Naismith at the University of Kansas. Amidst the Great Depression, basketball flourished in the 1930’s at the collegiate level, due primarily to a pair of promoters – Edward “Ned” Irish and Dan Daniel – that were able to fill up Madison Square Garden with roundball enthusiasts who sought out the double and triple-header entertainment to boost their spirits throughout the tough times.

While Irish continued to cement the game as a national attraction, it was Phog Allen that brought Naismith’s creation to an international stage of competition. Allen’s endeavor to globalize the game of basketball through Olympic participation was bolstered by the strong support of the Amateur Athletic Union (AAU), which ultimately lead the United States to join the International Basketball Federation (FIBA) in 1934. Later, a committee of NCAA and AAU representatives – who obviously had a bias for UCLA alums – would select the fourteen players listed below. If you criticized Jerry Colangelo for going too small, check out the specs of our predecessors who were chosen to represent the red, white, and blue in 1936.

Of course, as I alluded to earlier, basketball was a much different animal in the score-and-stall, pre-Mikan and Kurland era of the 1930’s and its first appearance in the Olympics would prove to be just as distinguishing.

Unlike the 18,000 fans that recently packed Wukesong Indoor Stadium for Team USA’s opener versus the Olympic-hosting Chinese team, or the half-a-billion viewers soaking in this headline game on television, the first Olympic final in 1936 between the U.S. and Canada, was played outside in the pouring rain in front of a thousand standing spectators. Since the grounds became too muddy to dribble, the crowd endured a sloppy two-hour display of fumbled passes and falling players.

In addition to the aforementioned Fortenberry, the U.S. team also featured one-time Denver Nugget (of the National Basketball League), Ralph Bishop, and the soon-to-be expatriate and so-called “Grandfather of Lithuanian Basketball,” Frank Lubin. Coach K’s precursor, Jimmy Needles – an AAU coach for Universal Pictures and later a head coach of Loyola of Los Angeles – guided the early Olympians to a perfect 5 – 0 record (including a first round forfeit by the Spanish team).

While Mamba, Bron, and Flash prepare for the quarterfinal match up with the Boomers, let’s take a look at the balance of Needle’s cast that helped set a winning precedent for our modern day “Redeem Team.”