‘Covering Those Guys, It Was the Luckiest Gig I Ever Got’ 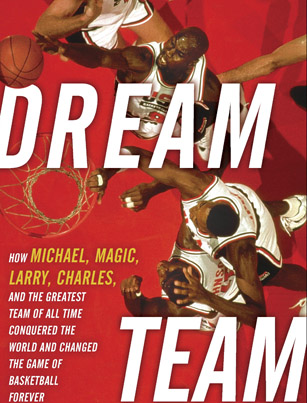 I remember the first time I met Jack McCallum. It was Fall 2009, and Sports Illustrated was hosting a basketball game in Manhattan, NY, in celebration of senior writer Chris Ballard’s then-recently released, The Art of a Beautiful Game.

The gym—located just off the Hudson River in a space called Chelsea Piers—was choice, with freshly polished hardwood floors, regulation backboards and sturdy rims. And the game, the game was choice too, filled with plenty of talent. Well, maybe not basketball talent, but writing talent.

At one point in the game, SI’s Ballard and Chris Mannix, ESPN’s Henry Abbott, NY Times’ (now Grantland’s) Jonathan Abrams and TheBigLead’s Jason McIntyre were all on the floor at the same time. The MVP of the scribal talent, though, the MJ of writers on the court was Jack McCallum, a long-time SI staffer who covered the NBA from 1984 until late in the Aughts, and authored the acclaimed Seven Seconds or Less.

To be honest, I don’t remember what McCallum’s game was like—though I recall one particularly difficult mid-range bankshot—but I do remember that after the game, dehydrated and disgustingly sweaty, we all headed upstairs to a dinner and drinks reception.

What we consumed and imbibed that night is lost to time. But, again, I do remember that McCallum, older and more established than anyone else present by a longshot, held court for the better part of the night. He reminisced about his own basketball-playing days. He reminisced about covering Larry Bird. He reminisced about the ever-changing NBA. As McCallum spoke, the group encircling him grew larger and listened closer—intent on not missing a single sage story.

Now, with the upcoming July 10 release of his book, Dream Team: How Michael, Larry, Charles and the Greatest Team of All Time Conquered the World and Changed the Game of Basketball Forever, McCallum is set to hold court for a much larger audience on a subject he knows better than almost anyone: the USA’s 1992 Olympic basketball team—the Dream Team.

McCallum has so much insight—he was on the Dream Team beat in ’92, and covered it from roster formation in the States to Gold medal in Barcelona—and info—while preparing the book, he interviewed every single player, from Christian Laettner to Michael Jordan, as well as almost anyone remotely connected to the team in any way—that his first version of Dream Team came in at 140,000 words. Eventually, through rewrites and edits and, amazingly, more interviews, he was able to chop it all the way down to 36 chapters and 330-plus pages. (Additionally, he built a website to host some of the outtakes and better moments that didn’t make the final cut.)

Recently, we had the chance to catch up with McCallum to discuss the writing of Dream Team: How Michael, Larry, Charles and the Greatest Team of All Time Conquered the World and Changed the Game of Basketball Forever, a must-read for any real basketball fan.

SLAM: Aside from the obvious—it’s the 20th anniversary of the 1992 Olympics—why write this book now?

Jack McCallum: I’ll tell you the truth, it wasn’t my idea. It was an editor’s at Random House. He said we’re coming up on 20 years and it would be a good look back.

I mean, (a) there’s a whole host of people who don’t really remember that much about it; (b) there was a lot of background as to how the team was selected; (c) not to mention, you fast-forward 20 years and a lot of these guys are still in the headlines. Michael [Jordan] owns and manages a team. Magic [Johnson] is all over the place. Larry [Bird] is running a team. [Charles] Barkley is more prominent than ever. None of these guys have really disappeared from our consciousness, so you could have a broad canvas. You could bring back to life 20 years ago, but you could also write about what they’re doing now.

SLAM: At the time, way back in 1992, did you ever think about writing something substantial then?

JM: I did. In fact, I was going to do something but it just kind of fell apart.

Now, for that reason, it’s confusing. When you google it, it shows up that I had written a book back in 1992 when I hadn’t [laughs]. I didn’t do it then, but for some reason this report that one was going to be done shows up in connection with me.

So it did occur to me, it just didn’t work out. When we got back from Barcelona, as I write in the book, it almost seemed like the end of an era. Larry retired; Magic subsequently retired; Michael played one more year; and I was just kind of tired of the beat and wanted to do a little something else because it seemed like my guys were sort of gone. The Dream Team, as I wrote, sort of brought an end to an era, and I guess for a while I didn’t want to write anything more about it myself.

SLAM: So I guess you had a lot of old notes and notebooks to fall back on when you finally sat down to write this book.

JM: Oh, yeah. Fortunately, I’ve always saved my articles. So the first thing I did was go back and read everything I had written about these guys going back to 1984. That’s when Michael came into the League. Clyde was already in the League, and obviously Magic and Larry were. That’s also when I began covering the League.

SLAM: I know getting guys to sit down for interviews is a tough task—especially these guys. How’d you go about getting all the info and interviews you needed for the book?

The No. 2 challenge was, everybody started telling me—and it’s been written 100 times—that there was no video of that magic intrasquad scrimmage in Monte Carlo, when Michael’s team went up against Magic’s team. I became convinced that I wanted to try to find that. The problem was, I didn’t really want to contact USA Basketball and the NBA because I didn’t think they’d give it to me—and I didn’t want to alert them to the fact that I was sort of doing this [laughs].

Eventually I found the guy who shot it for USA Basketball. I went to his house to try to find this magical intrasquad game. It sort of became the holy grail. There, amongst a pile of 100 VHS tapes, I finally came upon this game between Magic and Michael. I really felt good when I got that, like, Hey, man, this is something that nobody else has.

Getting back to the first challenge, the hard thing was, one by one, getting the guys to interview. The hard one is always going to be Magic/Michael/Larry, for different reasons. It took a long while, but I finally got everybody. I interviewed them all person-to-person, and they all were incredible. Whether I talked to them for five hours, as I did some of them, or whether I talked to them for an hour, they all remembered stuff very vividly. This was a very important part of their life, so they were all very into the Dream Team. That really helped a lot.

SLAM: It’s such a mythologized game and event—that scrimmage in Monte Carlo—I sort of feel like reading about it is enough and it shouldn’t be aired. It can only be a letdown.

JM: The game itself does not live up to the mythology. It was more—I think [Mike] Krzyzewski had the best take on it. It wasn’t the actual basketball that was played. It was how seriously these guys took it. That doesn’t exactly come across in the video. It’s not the most compelling game. If you watch four minutes of the Oklahoma City Thunder run up and down the court, you’ve seen better basketball. This thing has sort of a ragged scrimmage feel to it.

On the other hand, as a historical document, it’s sort of like you have some sort of moving picture of the Declaration of Independence being signed. And even though it’s not very interesting, it’s interesting simply because of the people who are in the photo.

SLAM: A few weeks ago you wrote about Mike D’Antoni, and about how it’s tough to report on people you’re close with because the lines are so blurred. Did you feel that way at all about any of the Dream Team guys and about writing this book?

JM: Well, you know, these guys are a little more distant. I know them and they know me, and they were incredibly important for my career. The fact that I was able to cover these guys just did everything for me. Let’s face it, I’m not trying to give false modesty, but you’re only as good as the guys you cover—and I happened to cover them. So I owe a great debt to them.

So in answer to your question, it was always easy to keep them at arm’s length. I probably said some stuff in there that Magic won’t be the happiest [about], probably Michael also, but I would say that’s not hard to do. A guy like D’Antoni, we’re sort of on the same wavelength. We’re the same age basically, we talk about family, and we’re a little bit of the same plane. But I would never say that I couldn’t write honestly about these guys; there’s certainly enough distance between us.

I mean, don’t get me wrong, I liked some guys on the team more than others and felt closer to some guys than others. But honestly, at the end of the day, every one of those guys—except for [Christian] Laettner, who I didn’t know very well—I really liked. I can’t say that there wasn’t one guy who I didn’t have some kind of affection for.

Covering those guys, it was the luckiest gig I ever got.