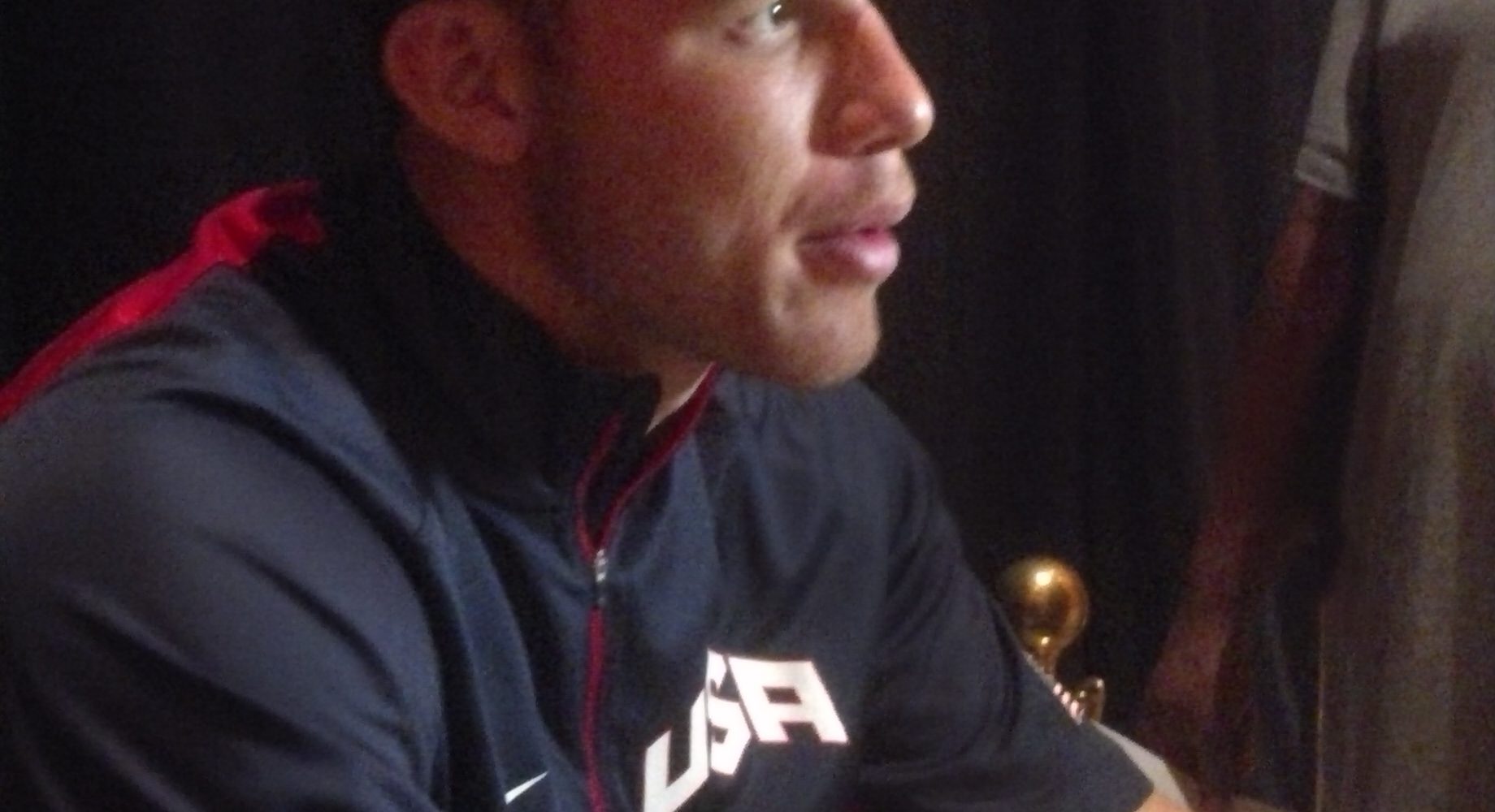 It has to be a humbling experience to be a superstar player, making millions as a savior of an NBA franchise, yet having to essentially audition for a spot on a basketball team. That’s basically what Blake Griffin had to do in Las Vegas last week before USA Basketball Men’s National Team coach Mike Krzyzewski and chairman Jerry Colangelo. But as the world knows by now, Blake, Andre Iguodala and James Harden dazzled enough in their respected casting calls to be granted the final three spots on Redeem Team 2.

SLAM was in the audience for the official roster announcement on Saturday. Coach K spoke about commitment and upcoming challenges; Colangelo discussed athleticism and roster depth; Kobe Bryant and LeBron James made their usual patriotic proclamations. As for Blake, the gravity-ignoring All-Star just sat quietly on the stage, looking like the new kid in class. Thankfully, after the announcement, the Clippers’ prized pupil was in a more talkative mood, electing to chat with reporters about everything from the selection process to his humbling role on the super squad; here’s the transcript from BG’s sit-down with the group:

Blake, how excited are you about making the team?

Blake Griffin: I’m very excited. It’s been a dream since I was young, watching the Dream Team in all those documentaries and all that. To be able to represent our country is unbelievable.

You came out Wednesday to work out and show your knee was okay?

BG: My knee felt fine. I told them that, but with all the injuries that have been going around, they were a little on edge about injuries, which was perfectly fine. Just being able to come in a little early and be able to go in these past two days kinda put [injury issues] at ease.

Talk about Coach K being a college coach who’s able to make the transition to this level.

BG: I think the amount of respect that he commands, the amount of respect guys have for him, whether it’s on a college level or pro level, [makes him successful]. Obviously, he’s one of the best coaches that has been around for however long he’s been coaching. Having him here and knowing his knowledge of the game and the way he relates to pro players just makes it easy, pretty much seamless.

There’s been a lot of discussion today about restoring the prestige of the USA program. With that comes pressure to win gold again. How has Coach K alleviated those pressures?

BG: Really, he just talks about buying in. With all the talent we have, if everyone buys in and everybody puts the time and energy and effort into playing basketball the right way and really representing the country—not just saying it—everything will take care of itself.

You’ve thrown down a couple of monster dunks lately in practice. Is that you just having fun, or are you proving that the knee is okay?

BG: LeBron had all his [Skills Academy] campers come in. They asked me to do a couple of dunks. I tried to show them something. That’s about it. You probably won’t see much of that.

We talked about the pressures to win gold, but are there any personal pressures now that you’re under the international spotlight?

BG: The great thing about playing on this team is that there’s not really a spotlight. You look to the left and there’s Melo, LeBron and Kobe. You go down the line and there’s superstars at every position. For me, it’s a chance to come in and play a role, be a role player and do the things I need to do to help him. It might be rebound one game, play defense one game. It’s a chance for me to really concentrate on certain things and work on those.

There aren’t a ton of big men here. You expect to play a ton of minutes?

BG: It’s whatever they ask of me, to be honest. The bigger forwards, LeBron and KD, are capable of playing the 4 in international ball. For the most part, I’ll be a 5, with Tyson and Kevin. I’ll find my minutes somewhere in there, but it’s not a huge issue for me as long as I come to practice everyday and contribute and get better.

Have you played any international ball before?

BG: Never have. Never played in any international games.

What’s going to be the most different aspect for you?

BG: Obviously, a lot of the rule changes will be different for us. The games are shorter, so hopefully, we don’t have to really pace ourselves. There are so many guys, so many rotations, that you can go really hard. That’s something that Coach K has stressed. For me, the little things like the goaltending rule, or the lack of a goaltending rule, is something that I’m trying to pick up on. I’m trying to use that to our advantage—when you see a ball go up, you can take it off the rim, especially on free throws. You can take it off the rim and don’t even give them a chance. Also, there’s no three seconds in the lane. That changes things a lot. That should make our help defense better just ’cause we’re so used to having to get in and get out constantly.

Was it nerve-racking at all to try out for a team?

BG: To be honest, it wasn’t, because of the caliber of team it was. Three guys were cut that were unbelievable players. It’s not like you’re cut from this team ’cause you’re not good enough necessarily. Maybe there was a position that was full. Things like that. My nerves weren’t really high like that. It was just a matter of coming and doing what I needed to do.

What was the last team you tried out for?

BG: The last team I tried out for was the U.S. team when I was 17. I was there a couple of days but I got hurt.