Russia No Match For Team USA 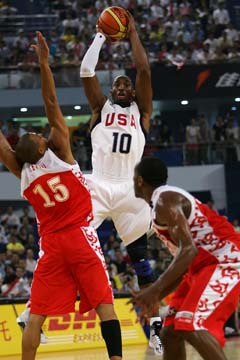 I attended the USA/Russia basketball game in Shanghai Sunday afternoon. My report for NBC.com can be seen here. It includes a pretty extensive straight game report, but of course SLAMonline readers need to know more. Much more.

Last year I walked into a mall in Kuala Lumpur, Malaysia and saw three or four story signs featuring LeBron James and Kobe Bryant and it truly struck me just how much

these guys are international superstars. That fact blew me away again on Sunday. Even after living in China or three years and being fully aware of the NBA’s popularity here, the intensity of the fans’ passion amazes me every time I experience it in person.

An hour or more before the game, the early arrivers in the slowly filling stadium were enthralled watching the American team warm up, loudly cheering every made three pointer and every dunk thrown down. Dwight Howard and Chris Bosh were the last guys on the court, enjoying the attention and playfully launching three pointers to great applause. Before walking off the court, both faced the crowd and waved their arms drawing huge applause. They were clearly enjoying the moment and why not?

Still, the undisputed two kings are LeBron and Kobe, in that order; KB consistently draws the largest cheers. Any time either of them touched the ball during the game, there was an audible level of excitement, and they both came through with some spectacular moves, though Kobe had a far more consistent game. Twenty seconds into the game, he was fouled and when he went to the line, he was met with chants of “MVP.”

After the game, he told a throng of Chinese reporters how appreciative he was of such support. “It feels like home away from home. I think it’s great to be this far from the Staples Center and still feel like I’m home and have so much support. Fans here have been terrific and it’s greatly appreciated. And the feeling is mutual.”

USA came outplaying well, executing with ease but not hitting shots. They never tailed but the score was tied 9-9 when DWade checked in for Carmelo, who never seemed to find his groove. DW immediately buried a three, followed up by a sweet drive and off balance finish. He looked great all game, smooth and effortless and his entry really changed the game. Then Chris Paul checked in for JKidd and the transition was complete. He split the defense and created openings. Soon, Deron Williams entered and the dual point guard offense clicked beautifully. Expect to see more of this in coming weeks.

Two gorgeous dunks highlighted the first half, certainly for the fans on hand. One came when LeBron grabbed a defensive rebound, teetering on the baseline right in front of me and looked all the way down court for Kobe. He threw a court length football pass, which landed in KB’s hands, a little too far under the basket The crowd was oohing the pass and catch but they hadn’t seen anything yet. Kobe took his defender along the baseline backed him away with his body, and then leaped from standing for a 180 jam. A few minutes later, Wade stole the ball at midcourt and raced down for a smooth, gliding tomahawk.

Watching the game from so close it was really apparent how much quicker the USA team was. The Russians were big, strong, physical and well coached, but all but two players lacked a level of quickness. Andrei Kirilenko and point guard J.R. Holden, an American—actually my Pittsburgh homeboy!—playing on a Russian passport were the only two players on their team with the same level of athleticism as their opponents.

At half time NBA Legends Willis Reed, Sam Perkins, Glen Rice and Dominique Wilkins were on hand to present a signed ball and hats to a youth group. They were standing in the hallway waiting to go out when the team starts returning. Many players went over to pay their forebears, especially Reed. Ex Lakers teammates Rice and Bryant greeted each other with a big hug. Rice, one of the best three point shooters ever, greeted Michael Redd, one of the best today, with a simple message: “Let that thing fly!”

And he did—checking in at the end of the third quarter and burying two threes in two minutes. That was after Kobe had put an end to a Russian run by scoring 12 quick points. It was his biggest offensive explosion of the first three exhibition games, as he had concentrated on D and distribution.

“I take whatever the defense gives,” Redd explained after the game. “And it’s not just me, its everybody. It just varies from game to game. Some games you have open shots, there are opportunities present themselves, you have gaps you penetrate. Other things open up for your teammates, you give it to them. You kind of let your opponents determine that.”

Kidd never got off the bench in the second half, with Paul starting and splitting the minutes with Williams. Afterwards, Coach K brushed that off, saying it didn’t mean anything, he was trying different combinations of players and Paul needed more minutes to get ready. But the team definitely looked better with CP on the floor. For one thing, Kidd could not keep the slippery Holden I front of him. Kobe spent a lot of time guarding the 6-2 pg.

Holden, 31, has starred in Europe for years now and he proved without a doubt that he can hang with anyone. He finished with 17 points and played a solid game, never backing down and giving as good as he got.

“It was a little weird during warm-ups to look over and see USA on their chests,” Holden said. “That was eerie, but then the ball goes up and they’re trying to tear your head off so you can’t hesitate or ponder. Kobe guarded me the most ad I guess that’s a compliment I don’t feel like I really have anything to prove, but it’s about respect. Those are the four or five best guards in the world and to go out there and compete with them was a great feeling.”

After the game, Coach K and the USA players all talked about what a tough game it was – perfect for training – and how happy they were with their defensive effort. Concerns included Carmelo never really seeming to be fully involved and LeBron and Dwight Howard both struggling with fouls. But the team should have enough depth to continue compensating.

One possible answer to the lack of big man depth—they only carry three real bigs in Howard, Bosh and Carlos Boozer—was displayed in the fourth quarter when they field a team of LBJ, Kobe, Wade, Paul and Carmelo. After the game, Coach K rejected the notion of LeBron playing center: “We don’t have 1s, 2s, 3s, 4s and 5s. We have basketball payers. He wasn’t playing center. We’re just trying different combinations.”

Lebron looked completely befuddled when he was called for traveling on a drive, after being wrapped up by a defender and expecting to go to the line, but he’ll have to get used to such calls.

“That’s probably the biggest difference they are going to have to get used to,” Holden told me later. “They call traveling by the book in international play.”

The USA plays Australia Tuesday in a final exhibition game before coming to Beijing. Their first game is a much-anticipated matchup with China. Yours truly should be featured as part of a halftime NBC piece on China basketball. Let the Games begin!