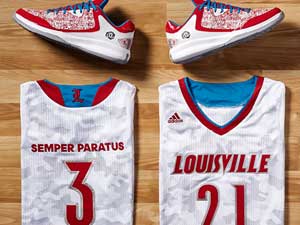 On Friday, the Louisville Cardinals will take part in the Armed Forces Classic in Puerto Rico. This week, adidas unveiled the Louisville uniforms to be worn during the event.

“These limited edition uniforms feature a white and grey camouflage pattern with red and light blue trim as a nod to the Coast Guard’s colors and racing stripe. The back of each jersey displays the Coast Guard motto of ‘Semper Paratus,’ which translates to ‘Always Ready.’

Check out the photos of the Louisville uniforms in the gallery above, and get your own version of the Armed Forces Classic D Rose 773 III at miadidas.com.