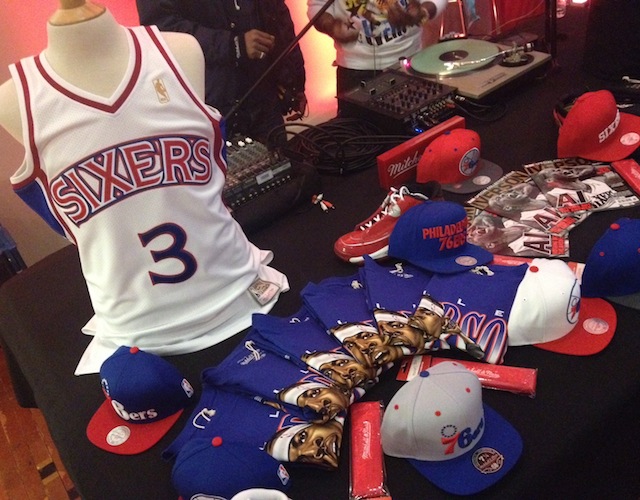 Tonight, the Sixers will raise Allen Iverson’s jersey to the rafters at Wells Fargo Center, acknowledging the legendary career of Philly’s adopted son, and one of the greatest players to ever do it. Friday night, the celebration had already begun, with an invite-only private reception at the Mitchell & Ness Flagship Store.

AI arrived just before 8 p.m. and was presented with a proclamation from Mayor Michael Nutter’s office and a resolution on behalf of the City of Philadelphia. He didn’t say much, but he didn’t have to—his wide, iconic smile said it all. Before settling on a perch atop a leather couch on the second floor of M&N’s showroom, The Answer took photos with a few lucky fans, grabbed a glass of champagne and flipped through a copy of SLAM Presents IVERSON (on sale now!).

Looking around the room, it wasn’t hard to remember why AI made such an impression on so many people, of all backgrounds. I met a local R&B quartet that remembered obsessing over Iverson as youngsters. I reminisced over the seven-game Raptors-Sixers playoff series in ’01 with a Philadelphia native who switched from soccer and baseball to hoops when AI came to town, and wound up with a D-II scholarship and his own summer basketball camp. And I even met a couple kids from Buffalo, NY who made the trip down for the weekend without any concrete plans—or an official invite to Mitchell & Ness—and snuck their way into the building just to breathe the same air as The Answer (don’t worry guys, your secret’s safe with me). The power of Allen Iverson.

Thanks to M&N for inviting us and featuring a handful of AI’s SLAM covers. Stay tuned to SLAMonline for much, much more from Iverson’s retirement ceremony tonight.