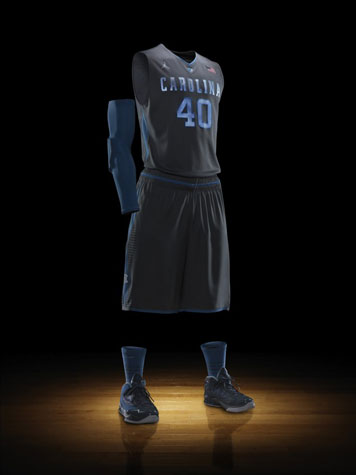 “We’re aiming to elevate college basketball,” Teague proclaimed to the media herd. “The Hyper Elite Platinum is the next generation of basketball uniforms, and there’s no better place to start than with the certified excellence of these nine teams. This jersey is where performance meets sustainability.”

As Teague hints, the Hyper Elite Platinum is somewhat of a fraternity, where each team earned its bid by having won a National Championship in Nike apparel and footwear. The Platinum distinguishes itself from its predecessor, the Hyper Elite, in many ways. Firstly (and most obviously), the jerseys have a platinum base highlighted with each schools color. But the underlying theme, as Teague notes, is high performance with little environmental harm. To achieve this goal, the fabric of the Hyper Elite Platinum shorts are made from 100 percent recycled polyester while the jersey fabric is made from at least 96 percent recycled polyester, which has also made these new jerseys 5 percent lighter than the Hyper Elite.

Along with the jerseys, the next generation uniform includes the Hyper Elite Platinum shorts—which features laser-cut bonded reflective school logos and perforations in its side panels for increased breathability—the Nike Zoom Hyperenforcer sneaker, and school-specific warm-up jackets, which proudly showcase each program’s Championship success.

Look for more details and quotes about these uniforms in SLAM 157, on sale in early March. But for now, roll through the gallery above for a peek at Nike’s newest look.