US vs Canada at ASW in Toronto. 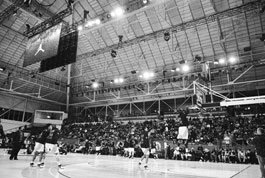 While the NBA’s brightest stars began to congregate in Toronto for All-Star festivities on Thursday, the game’s next generation was also on display in Canada that evening when two of the top HS programs in the United States (Oak Hill & Redondo Beach) traveled north of the border to take on two of the top programs from Ontario (Orangeville Prep & Father Henry Carr). When all was set and done, both American schools came away with the Ws.

In the first game, Redondo Beach of California cruised to a comfortable victory over Henry Carr 97-72. In the second match, Oak Hill Academy edged Orangeville Prep 77-67.

Check out images of all the action from Thursday’s contests above.