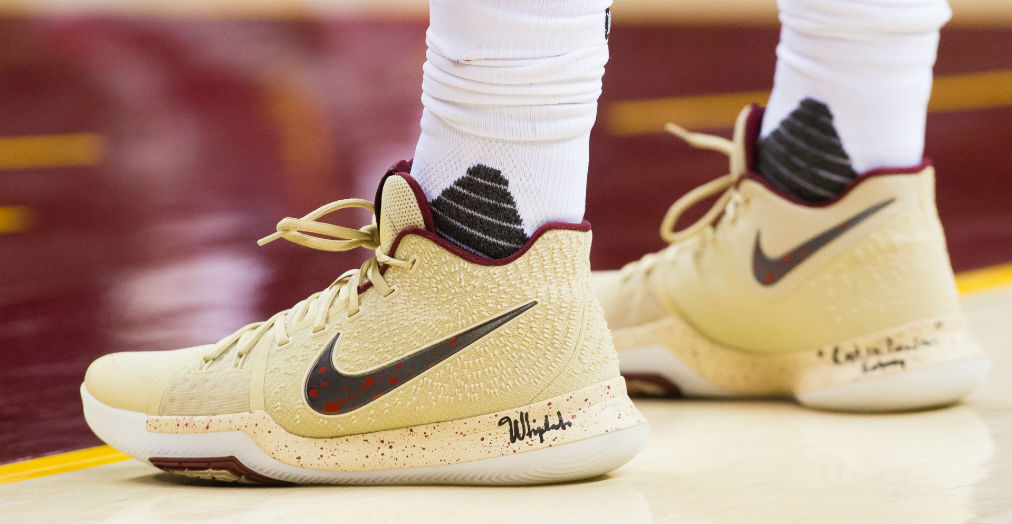 Kyrie Irving was sizzling and shaking in last night’s Game 1. The Cavs point guard had a light 24 points and 10 dimes in his team’s 116-105 victory. He put Norman Powell, who had 12 points off the bench, in the blender during the fourth quarter. In his ridiculous dribbling exhibition, Irving was wearing a new Nike Kyrie 3 PE. The colorway, which made its debut last night, had a desert-themed upper, scarlet red accenting on the Swoosh and a clear outsole.

The crowd rightfully lost its mind after Irving left Powell in the dust. Harlem’s own Dave East, sitting courtside, was part of those who started going crazy. After the game, East, along with his mother and child, linked up with Irving. East got to walk away with Irving’s PEs.

We talked to East about his basketball career in SLAM 205. He played AAU ball with Kevin Durant and Michael Beasley and still references hoops in his music. And because he’s a legit fan of hoops, he was hype. Irving, for his part, is a major sneakerhead and has been collecting sneakers and studying the marketplace for a long time, as he told us a few months back.