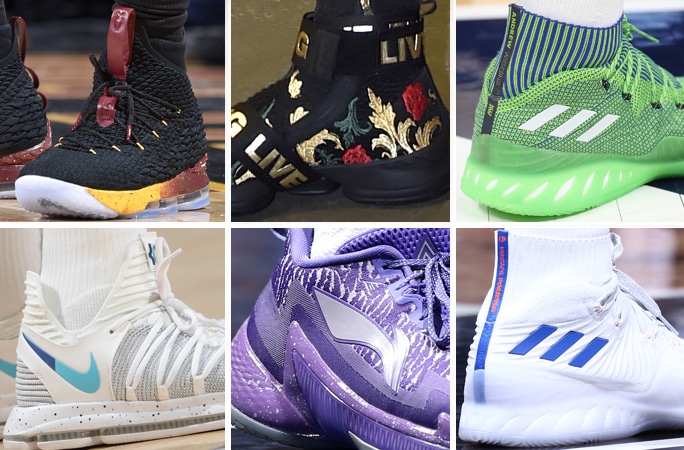 The night’s biggest sneaker news came just before the start of Cavs and Lakers game as LeBron James debuted his upcoming Nike x Kith “Long Live the King” collaboration as he strolled into the Quicken Loans Arena. James wore the newly designed version of his LeBron 15 featuring a new strap element as well as a design motif that has royal touches complete with embroidered red roses and metallic gold fleur-de-lis.

The adidas Crazy Explosive Primeknit 2017 continued to get its fair share of the spotlight as Andrew Wiggins, Kristaps Porzingis, Brandon Ingram and Kevon Looney all rocking dope colorways.

Closing out, Kevin Durant took the court in a cool, crisp colorway of his Nike KDX which featured an all-white upper and a two-toned Swoosh in shades of blue. And Young Jeezy took in the Pistons vs Hawks game in the Air Jordan VI Retro “UNC” before performing at halftime in the “Altitude” Air Jordan XIII Retro.

The rest of the night’s NBA kicks is just ahead.