Check out some of the standouts of last weekend's Nike EYBL Hampton session. 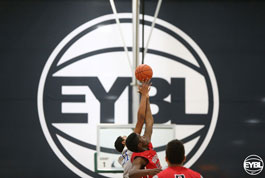 The 2015 travel team circuit officially took off this past weekend in Hampton (VA) at the Nike Elite Youth Basketball League’s (EYBL) first session.

Among the standouts from Session #1 was Detroit native Cassius Winston. The 6-0 junior point guard helped The Family (MI) to a 2-2 record this past weekend after averaging 22 points over four games, including a 33-point and 30-point outing in his last two.

Winston not only came away from last weekend as the EYBL’s leading scorer, he was also just as effective in dishing out dimes with a league’s best 5.8 assists per game.

Jersey native Myles Powell, a 6-2 junior guard at Trenton Catholic (NJ), shared the scoring leader title with Winston in Session #1 by also averaging 22 points, posting 23 or more points in three of his four games — en route to a 3-1 record for his NJ Playaz Club.

Meanwhile, All-Ohio Red forward Nick Ward and CP3 All-Stars elite big man Harry Giles proved their prowess in crashing the boards, emerging from Virginia as the leaders in the rebounding category with averages of 10.2 and 9.8 respectively.

Session #2 in Lexington (KY) is slated for the weekend of April 24.

Scroll through the photo gallery above to check out some of the action from last weekend’s session in Hampton.