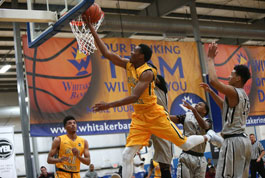 Last weekend, many of the nation’s top prospects gathered in Lexington, KY for the second session of this year’s Nike EYBL circuit. Among the top performers was Cassius Winston, a 6-0 Detroit native point guard in the Class of 2016, who continued to lead the Swoosh league in scoring, averaging 22.1 points per game after two sessions. On Sunday, he dropped 28 points against the defending champs NJ Playaz in a 79-76 victory for his The Family squad. In that same game, his teammate Miles Bridges, a 6-7 small forward, had arguably the top performance of the weekend with a 37-point outburst, going 14 for 24 from the field, while also grabbing 14 boards.

Scroll through the photos above to check out some of the top performers in action.