KD used his growth as a ballplayer to inspire the evolution of his sneakers. 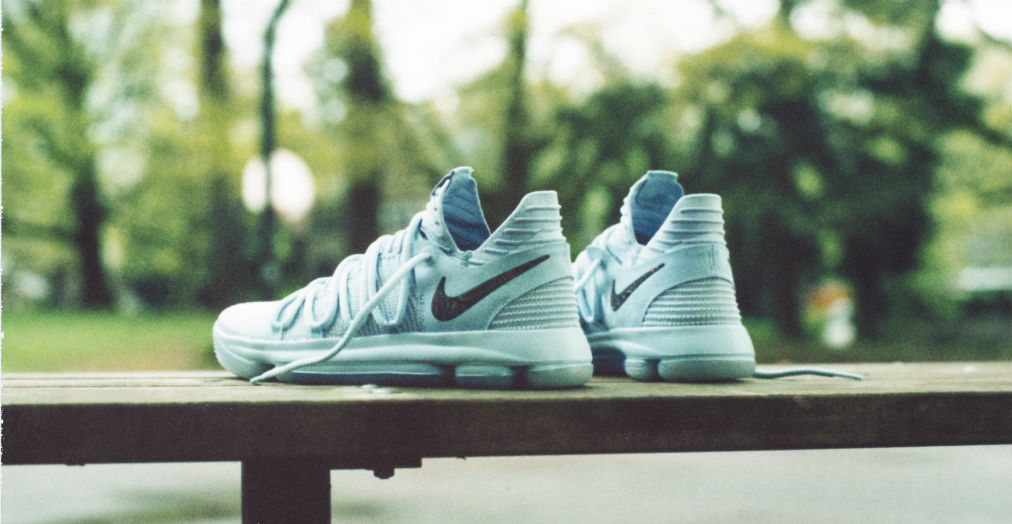 When the Warriors and Spurs tip off Game 1 of the Western Conference Finals today, Kevin Durant will be rocking his newest signature sneaker, the Nike KD10.

Durant and designer Leo Chang say that the KD10 features the best Flyknit construction that’s ever been on a basketball sneaker, saying that the Flyknit’s created “precisely for flexibility, breathability and support just where needed.”

In a press release Durant says, “Ten years of anything is pretty huge, but adding something as great as Flyknit makes it really special.”

Besides the Flyknit, Durant’s favorite upper material, Chang put a full-length Nike Zoom Air bag in the midsole for a cushioned ride. There’s also a unique and innovative lacing system, which was a big sticking point for Durant.

“They are big and stand out from a mile away,” he says via Nike. “It is one element Leo and I talk about when working designs — one thing that goes under the radar is the laces. To have Flyknit and a unique lacing pattern was key for us.”

In May 2007, Durant signed his first contract with the Swoosh. Now he’s one of their longest tenured signature athletes. He’s fully aware of the longevity and he used his evolution as a ballplayer to influence the evolution of his sneaker.

In a launch video Durant says, “To go on this evolution with Nike, to be on my tenth shoe, it’s just something I dreamt about. Each year has its own story. Going through different experiences–making my first All-Star Game, to winning my first MVP, to scoring titles, Olympic medal, going to my first Finals. I think all of those stories played a huge part in preparing me for the next year.

“To have your name on a shoe, to have it be yours, is special for me,” he says.

Durant describes the 10 as “innovative, stylish and comfortable.”

The Nike KD10 “Anniversary” features a Swoosh that’s got every color of the Longhorns, Thunder and Warriors mixed in it. It drops on May 26. The KD10 “Still KD” white colorway drops June 1.

Photos and video courtesy of Nike