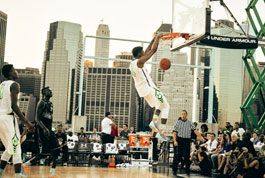 The tenth edition of the annual Under Armour Elite 24 went down last night in a filled to capacity Brooklyn Bridge Park Pier 2. Among the standouts of this year’s showcase were Frank Jackson, who went from 20 points, including a 360-dunk, Edrice Adebayo, who put up 21 points and 8 rebounds and Josh Jackson, who ended the night with 12 points and 7 rebounds. But in terms of high-flyers, Alabama-commit Terrance Ferguson, Cali native TJ Leaf and Brookyn’s own Shamorie Ponds and Rawle Alkins were among the nooable dunkers of the night. Scroll through the photo gallery above to re-live all the action.