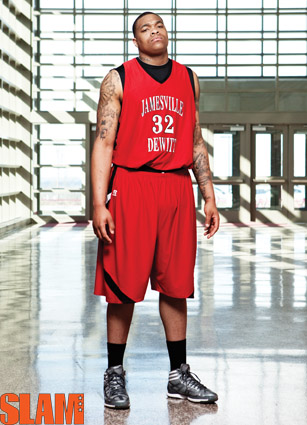 DaJuan Coleman was at the gym early on the third Sunday in March, getting in a quick lift and some roadwork on an otherwise off day. It’s hardly unusual to see a top high school player working out on his own time, but this was different. The day before, his high school career at Jamesville-DeWitt HS came to a painful end with an unexpected loss in the New York Class A state semifinals.

If Coleman could’ve justified just one day off all year, this would’ve been it. But he had other ideas. “It was something I had scheduled, and I know if I want to reach my goals, it’s basically just how hard you work,” Coleman says. “That’s how bad I want it.”

Couple that desire with his obvious talent, and you see why Coleman is one of the best players in the Class of 2012. The 6-9, 275-pounder earned a spot in the McDonald’s All-American Game thanks to his size, strength, soft hands and an ever-improving post game, a combination that has allowed him to stand out in a class full of terrific big men. He’s got all the right role models, too.

“I try to watch everybody; I think I’m a mix of rebounding and scoring like Kevin Love, toughness like Kevin Garnett and Dwight Howard on defense,” Coleman says. “I’m trying to be the best player I can.”

Conditioning and extending his range remain a challenge for Coleman, a naturally huge dude who’s most comfortable dominating on the block. He’s focused on improving—“Like they say, it only takes a summer to get better, and I want to be a totally different player by next year,” he says—but even as he continues to develop, he’s already good enough to have earned offers from half of this year’s Final Four. Ultimately, he passed on Ohio State and Kentucky to stay a bit closer to home: Next season, he’ll suit up for the nearby Orange of Syracuse.

Coleman doesn’t have to be reminded that Coach Jim Boeheim’s program recently endured a brutal stretch of off-court controversy, drama that ultimately couldn’t keep the Orange from making a run to the Elite 8. Coleman committed to Boeheim just weeks before the Bernie Fine allegations became public, and he says whatever doubts or second thoughts he might’ve had about his decision didn’t last long.

“At first it was a little crazy,” Coleman admits, “but it’s just a family up there, and everything they went through, they still stuck together. Going to the Elite 8 showed their character. I definitely want to be a part of that.”

Having watched Cuse make its Tourney run this spring, Coleman is already looking forward to contributing next season. “Coach said if I work hard enough, I’ll be starting, and I think I can make a big impact,” he says. “I’m looking forward to getting all types of boards. I think we can make a run next year just like this one.”

Despite rumors to the contrary, DaJuan isn’t related to his similarly sized and named Syracuse predecessor Derrick, but Orange fans are hoping he can make an impact akin to that of the former Cuse All-American. We already know he’s got the game. If he keeps up those early morning workouts and commits to a summer of improvement, those fans won’t be disappointed.