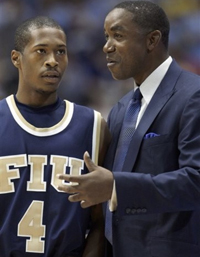 The first week of the season has passed, and we have another SLAM Radio for you.

This week is the beginning of the early signing period and we already have some news. Ohio and Baylor have signed two of the highest ranked big men in the class. Harrison Barnes is set to commit at the end of the week; will he choose the front-runner Duke, or another team on his list?

After losing to a Division II team in an exhibition match, Syracuse opens their season with a victory over Albany during the 2K Sports classic. Make that 800 wins for Jim Boeheim and redemption to get the stink of an unacceptable defeat off of the ‘Cuse. And after all that posturing Isiah Thomas made, clearly because he was afraid to get mollywhopped by UNC, FIU was not embarrassed in the slightest; UNC had trouble taking care of the ball with 25+ turnovers & FIU played within twenty points of a top 5 team in the country.

For this episode, our guest is former writer for ESPN.com and radio host for AM 620 The Bull, Bomani Jones. He’s an expert on ACC hoops and provides a point of view few people can provide.

We at SLAM hope you enjoy this week’s episode. Also, we will be doing a special episode early next week to analyze all major moves following this weekend’s signing period.