Lou Williams torched the Hawks for 26 points to propel the Raptors to victory Friday. 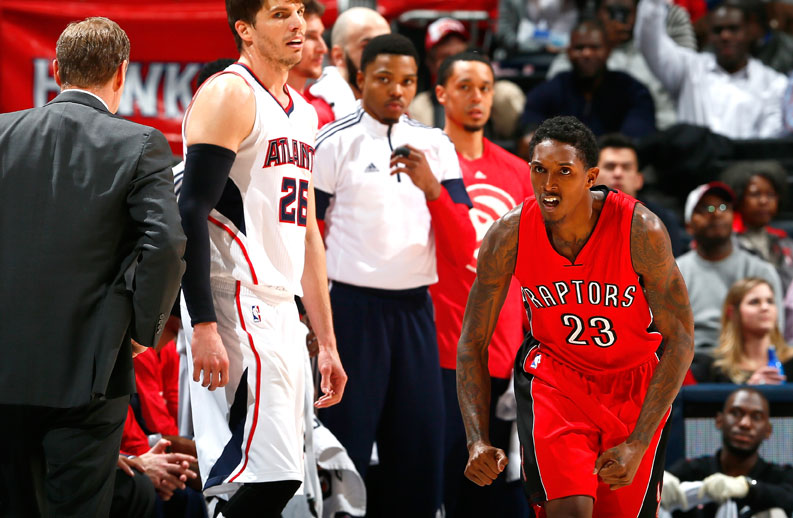 Anthony Davis (13 points, 11 rebounds, 2 blocks) made his return to the court Friday night after missing two games plus All-Star with a sprained right shoulder. But The Brow showed signs of rust, and the Magic pulled off the upset.

Nikola Vucevic AKA the double-double machine had 18 points and 13 boards to lead the way for Orlando. Elfrid Payton approached a triple double with 10 points, 11 assists and 7 rebounds, Victor Oladipo scored 22 and Evan Fournier added 16 and 6. The Magic held the Pels to just 13 points in the fourth quarter. Orlando has now held five straight opponents to under 100 points. Tyreke Evans finished with 14 points, 10 assists and 8 rebounds for NOLA in the loss.

Rodney Stuckey exploded for 30 points in 27 minutes off the bench and the Pacers took care of the lowly Sixers. After playing his heart out, Stuckey had to leave the floor with an injured ankle at the end of the fourth quarter. CJ Miles chipped in with 17 points and Luis Scola contributed 16 points, 7 rebounds and 3 steals.

The Sixers were already lottery bound prior to dealing their best player, Michael Carter-Williams. And the addition of Javale McGee isn’t exactly going to turn Philly’s season around. There were bright spots Friday night, though. Jerami Grant (16 points), Luc Richard Mbah a Moute (16 points, 10 rebounds) and Nerlens Noel (12 points, 9 rebounds) all showed out.

The Raptors have Atlanta’s number. After last night’s victory on the road, Toronto captured the season series 3-1. TDot won in large part thanks to defense; the Raps matched their season-high steals total with 15. There was another big reason, too…

Lou Williams erupted for 26 points including 7-10 from three-point range to go along with 4 steals in 24 minutes of play. DeMar DeRozan posted 21 points, 8 boards and 3 steals, Jonas Valanciunas had 8 points and 13 rebounds and Kyle Lowry went for 10 points and 9 dimes.

The Pistons acquired Reggie Jackson and Tayshaun Prince in separate moves Thursday. Obviously, they weren’t ready for action Friday, so Detroit was left short-handed in a matchup with Chicago.

Spencer Dinwiddie was called up from the D-League to play point, and the youngster was a pleasant surprise. He dropped 12 points and 9 assists to go along with 3 steals. Most importantly, Dinwiddie completely outplayed Derrick Rose, who was abysmal; the former MVP shot just 2-9 from the floor for 9 points and committed 6 turnovers in 31 minutes. Dinwiddie’s new teammates were no slouches, either. In particular, Andre Drummond (18 points, 20 rebounds), Greg Monroe (20 points, 6 rebounds, 2 steals) and Caron Butler (20 points, 4 steals) were terrific. The Bulls led through the game’s first two quarters, but couldn’t hold it together. Jimmy Butler scored 30 points, Joakim Noah put up 10 points and 14 rebounds and Pau Gasol added 12 points, 8 boards and 3 blocks.

First of all, let’s all hope that Chris Bosh is okay. Scary stuff.

Now on to last night’s Knicks-Heat matchup. Man, with ‘Melo shut down for the year, it’s slim pickings on this New York roster, forreal. Langston Galloway and Tim Hardaway Jr. are now their go-to scorers from here on out. Yikes … Eight of nine Heat players who saw action Friday scored in double figures. Mario Chalmers put up 13 points, 8 assists, 6 rebounds and 8 (!!!) steals. Luol Deng nearly triple doubled as well; he finished with 13 points, 8 boards and 8 dimes. Meanwhile, Hassan Whiteside (12 points, 9 rebounds, 2 blocks) continues to be a force inside, and Shabazz Napier had himself a game despite 7 turnovers with 18 points, 7 rebounds and 6 assists.

Who else can’t wait to see Goran Dragic in action for Miami?

Kevin Martin dropped 28 points and pulled down 6 boards, Andrew Wiggins shot 9-15 from the field for 20 points and Nikola Pekovic was a force inside with 16 and 11 as the T-Wolves outlasted Phoenix. Ricky Rubio (10 points, 14 assists, 8 rebounds) flirted with a triple double and Gorgui Dieng (15 points, 12 rebounds) was the X-factor off the bench. Look for Kevin Garnett to suit up for his old squad next game.

The Suns, no longer with Goran Dragic and Isaiah Thomas, were unable to defend Wiggins in crunch time. Markieff Morris (31 points), Eric Bledsoe (12 points, 7 rebounds, 6 assists) and Alex Len (11 points, 10 boards) carried the load for the losing side.

Maple Jordan had his moment:

The first game of ESPN’s double-header was a complete blowout. LeBron James and company got it going early and never took their foot off the gas pedal. King James went for 28 points, 6 assists and 5 rebounds in just 25 minutes, Kyrie dropped 25 and 7 and JR Smith posted 15 and 2 steals. Washington shot just 1-16 from beyond the arc. Nene and John Wall posted identical statlines of 18 points, 9 assists and 2 blocks, but the rest of the team failed to show up. It’s apparent just how much the Wiz miss Bradley Beal. Get well soon, Big Panda.

LeBron and Kyrie were fully in sync Friday night:

Eight Mavericks scored in double figures, and Dallas capitalized on 21 Houston turnovers to win its 37th game of the season. The Mavs got nice production from an unlikely source: Al-Farouq Aminu, who posted a cool 17 points and 12 boards. With Rajon Rondo showing signs of rust coming off an eye injury, Devin Harris stepped up with 17 points, 7 assists, 6 rebounds and 2 steals. Tyson Chandler went for 10 points and 14 rebounds. Dallas closed strong against its in-state rival to win despite 26 points, 7 rebounds and 5 assists from MVP candidate James Harden.

Look for Amar’e Stoudemire to play his first game as a Maverick come Sunday against the Hornets. Meanwhile, fresh acquisitions KJ McDaniels and Pablo Prigioni should see time for Houston when the Rockets face Toronto on Saturday night.

Like many of the teams that saw action Friday, both the Bucks and the Nuggets made moves the day before to beat the trade deadline. As a result, both rosters were a bit shaken up when they matched up in Milwaukee.

Khris Middleton was the Bucks’ high scorer with 15 as Milwaukee got the best of Denver. Jared Dudley put up 11 points and 8 rebounds, Jerryd Bayless added 11 points, 8 dimes and 7 rebounds and the Greek Freak went for 10 points and 9 rebounds. John Henson (14 points) put the team on his back during a seven-minute span in the third quarter in which he dropped four buckets. Michael Carter-Williams has a sprained right big toe and had to sit this one out for the Bucks. We’ll get to see him in action for Milwaukee soon enough. For Denver, Wilson Chandler was solid with 18 points, as was Jusuf Nurkic, who posted 15 and 11. Newly acquired Thomas Robinson sat out. It’ll be fun to see him team up with fellow rebounding madman Kenneth Faried.

So far, so good for the George Karl era in Sac-town. DeMarcus Cousins was a problem at home last night; the big fella dominated with 31 points, 15 rebounds and 2 steals (we’ll forgive you for the 9 turnovers, Boogie). Rudy Gay had 28 points and 3 blocks and Omri Casspi finished with 28 points, 6 assists and 4 steals as Sacramento topped Boston. It wasn’t pretty — Sacramento committed 24 turnovers — but the Kings overpowered the short-handed Celtics in the end. Avery Bradley (28 points, 6 assists, 4 steals) and Tyler Zeller (22 points, 6 assists) kept this one competitive. The C’s just got Isaiah Thomas via trade, but he won’t be ready to play until Sunday.

JAE CROWDER, WHAT WERE YOU THINKING:

The second game of ESPN’s Friday night double-header was much closer than the first. Well… at least for the first half, which ended Golden State 62, San Antonio 55.

The final 24 minutes were a different story. The Warriors’ offense was a thing of beauty. In fact, they played San Antonio basketball: unselfishly, lots of ball movement, always making the extra pass. When Steph Curry, Klay and company are playing with that style, they’re impossible to defend because the talent level is levels above their opponents’. At Oracle Arena on Friday, Golden State cashed in on 17 three-pointers, and the Splash Brothers were completely in control of the action — no small feat against the defending champs. Steph Curry scored 25 points, dished out 11 dimes and grabbed 4 steals. Klay Thompson finished with 20 on the night while Harrison Barnes chipped in with 16. Aron Baynes — yes, Aron Baynes — was the Spurs’ top performer with 12 points and 10 boards.

Curry is a magician:

The Lakers led 57-56 at halftime, but the Nets took a sizeable lead in the third quarter. BK led by 22 at one point in the fourth quarter until Los Angeles began to chip away at the lead. But it was too little too late.

Joe Johnson led all scorers with 23 points. Deron Williams had 12 points and 15 assists and Brook Lopez posted 22 and 14 off the bench. Thaddeus Young saw 12 minutes of action and scored 8 points in his Brooklyn debut. For the Lakers, Jeremy Lin dropped 11 of his 18 points in the fourth quarter, Ed Davis finished with 16 and 14 and Robert Sacre contributed 13 and 7.