Anthony Davis tied his career-high, plus the Hawks and Warriors earned their 50th win on Monday. 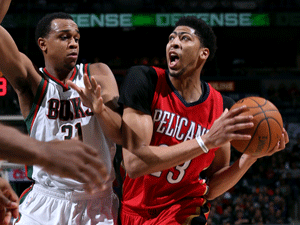 The Charlotte Hornets were on the search for their sixth win in a row last night at home, as they prepped to host the Washington Wizards. In the first quarter though, John Wall and his Wiz ensured a home team win wasn’t about to come easily. Wall (15 points, 9 assists) and Marcin Gortat (20 points, 7 rebounds) combined for 21 points in the opening 12 minutes—the same amount of points the entire Hornets team put up.

Mo Williams led the Hornets with 19 points and 7 assists in the loss, and Cody Zeller was responsible for this mean block:

But in the end, the Hornets’ win streak couldn’t hold up against the Wiz.

With a season-high 130 points from the Atlanta Hawks last night, the top team in the East became the first to hit 50 wins. (Golden State also hit the 50-point mark last night, but they’re in the West, so). The Hawks also hit 20 shots from the arc (a franchise record) on 55.6 shooting from long range.

After a 33-point first quarter, and a 43-point second quarter, the Hawks led 76-54 heading into the locker room. The Kings simply couldn’t make up the deficit in the second half.

Seven Hawks finished in double-figures, including DeMarre Carroll and Kyle Korver with 20 points apiece and Jeff Teague with 18 points, 13 assists, 5 boards, and 2 steals.

Even with 34 from Dwyane Wade, the Miami Heat lost the game at home last night to Isaiah Thomas (25 points) and his visiting Boston Celtics. The game stayed relatively close, with no lead exceeding 11 points. In the first quarter, Brandon Bass (14 points, 9 boards) played with one shoe on his foot and the other in his hand:

Later in the game, Hassan Whiteside and Kelly Olynyk were getting at it. Whiteside was hit with a Flagrant 2 and an ejection after this happened:

In the Battle of the Bros last night in Chicago, little sib Marc Gasol came out the winner.

Marc finished with 23 points (15 in the third quarter) to lead his Grizz to the win. Pau Gasol put up some respectable numbers too—13 points and 11 rebounds—his 43rd double-double this season, a League-best. Mike Conley (9 points, 9 assists) and Tony Allen (11 points) connected for this pretty play down the stretch that put Memphis up 101-91, which was the final box score.

That last bullet point is part of AD’s stat line from yesterday night’s game. He also had 6 assists and a steal. With those 43 points, Davis tied his career-high.

Anthony Davis was locked in! Ties his career-high with 43 points as he shoots 17-of-23 in the @PelicansNBA win v. MIL pic.twitter.com/SNptRkvcqN

Giannis Antetokounmpo set his career-high last night too, with 29 points at home in the loss.

Congratulations!! The New York Knicks became the first team to 50 losses last night! In their visit to Denver, the Knicks were simply blown out. After the all-even first quarter, the hometown Nuggets outscored the Knicks by 15 in the second quarter. They continued to pour on the points after halftime, with Kenneth Faried (19 points, 11 rebounds), Wilson Chandler (17 points, 6 rebounds), and Will Barton (17 points, 3 assists) leading the way. Also, this happened:

Skip the first 25 seconds in the video below, and then enjoy the Stephen Curry show:

So that’s 36 points from Curry, including seven 3-pointers, after he’d gone 1-5 from the arc in the first half.

Fellow Splash Brother Klay Thompson added in 25 as the Dubs rolled to their 50th win of the year. Eric Bledsoe led Phoenix with 19, and Brandon Knight added in 13…but Curry’s fire clearly outshined the Suns in Oakland.

The Los Angeles Clippers avoided losing their third in a row as they played host to the Minnesota Timberwolves yesterday. JJ Redick finished with a game-high 26 points, and DeAndre Jordan added 20 points and 17 boards. Oh, and DJ did this too off a lob from trusted PG Chris Paul (15 assists):

The Wolves struggled from the floor, shooting 37.3 percent. They were down by as many as 21 points. But rookie Adreian Payne collected a noteworthy double-double of 16 points and 15 boards. 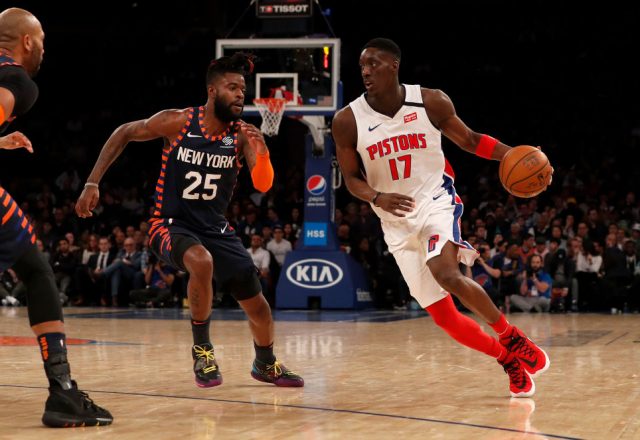