Damian Lillard dropped 25 points as the Blazers ended a three-game skid on Tuesday. 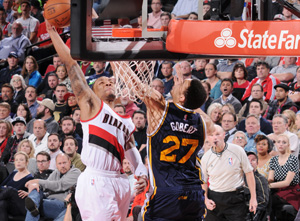 In recent days, these Philadelphia 76ers aren’t looking too shabby. At least not as shabby as they did when they opened the season 0-17. Last night, Hollis Thompson (career-high 23 points), Michael Carter-Williams (15 points, 12 assists, 8 rebounds), and the rest of the Sixers won their third straight game at home, as they put away Danilo Gallinari (season-high 22 points) and his Denver Nuggets 105-98. After taking a dominating 61-40 halftime lead, the Sixers extended that margin to 28 in the third quarter. The Nuggets attempted their best comeback and came as close as 6 in the final period. But with just 25.9 seconds left in the game and the 76ers hitting their free throws, Denver walked away with another loss.

With the win over the Miami Heat last night, the Detroit Pistons inch closer to that coveted Playoffs-bound eighth seed in the Eastern Conference. After the Pistons went on a 25-1 run to end the first quarter and go up 33-12, the Heat remained in the dust and never fully recovered—even with Chris Bosh going 9-9 for 21 points in the third. DJ Augustin led the way for Motor City with a 25-point, 13-assist double-double. Five other Pistons scored in double-figs, including Andre Drummond who had 14 points and 14 boards in the win.

Celtics’ Coach Brad Stevens decided to shake up the starting lineup last night in Boston’s road game against the Knicks, and it proved successful.

Marcus Smart will start at PG tonight and Evan Turner will start at SF. Jared Sullinger is back in at center. Jae Crowder to the bench.

That lineup change? It worked during the 1st Q. The Celtics lead the Knicks 26-19 after one thanks to 6 points apiece from Smart and Sully.

Boston opened up the game at Madison Square Garden on a 14-2 run. By the end of the first half, they had a 13-point lead on the hometown Knicks. Avery Bradley led the Celtics with 26 points on 11-14 shooting, and Jared Sullinger added another 22 points, 9 rebounds, and 6 assists. The Celtics shot nearly 55 percent from the field.

Carmelo Anthony was the high-scoring man for the Knicks, but shots didn’t fall easily as he went 9-23 for 21 points. New York came within 4 in the final period, but Boston wouldn’t give in as they ended their three-game skid and cut the Knicks’ four-game home winning streak short.

The Portland Trail Blazers’ losing streak ends at three, as they took care of things at home against the Utah Jazz. With Robin Lopez (11 points and 6 rebounds) back in the lineup, LaMarcus Aldridge’s All-Star numbers (22 points and 11 rebounds), and Damian Lillard feeling snubbed (25 points and 6 assists), the Blazers look good again.

It’s hard not to look good when you’re the guy posterizing a 7-1 dude:

Gordon Hayward finished with 27 points for the Jazz, which included a timely 3-pointer to come within 3 points of the Blazers with 1:24 remaining in the game. Lillard completed a layup on the following play and after a few missed shots, Joe Ingles (5 points) hit another 3-pointer for the Jazz to come within 2 with 9.9 seconds left. Aldridge knocked down both free throws to take a 4-point lead. Trey Burke (18 points) scored a third 3 for the Jazz with 0.9 on the clock, but the Blazers controlled the board after Lillard missed his free throws to finally put the Jazz away.

Early in the first quarter last night, the hometown Sacramento Kings had a 10-point lead on the visiting Golden State Warriors. But by the end of the quarter, the Dubs took a 7-point lead. By the end of the first half, Stephen Curry (23 points and 9 assists) and the Warriors were up by 21 and shooting 58 percent, thanks to plays like this:

DeMarcus Cousins’ (26 points and 11 rebounds) Kings won the third quarter 38-31, but failed to take the lead. Four of Sacramento’s starters scored in double-figures, but Golden State’s bench outscored the Kings’ 61-12.