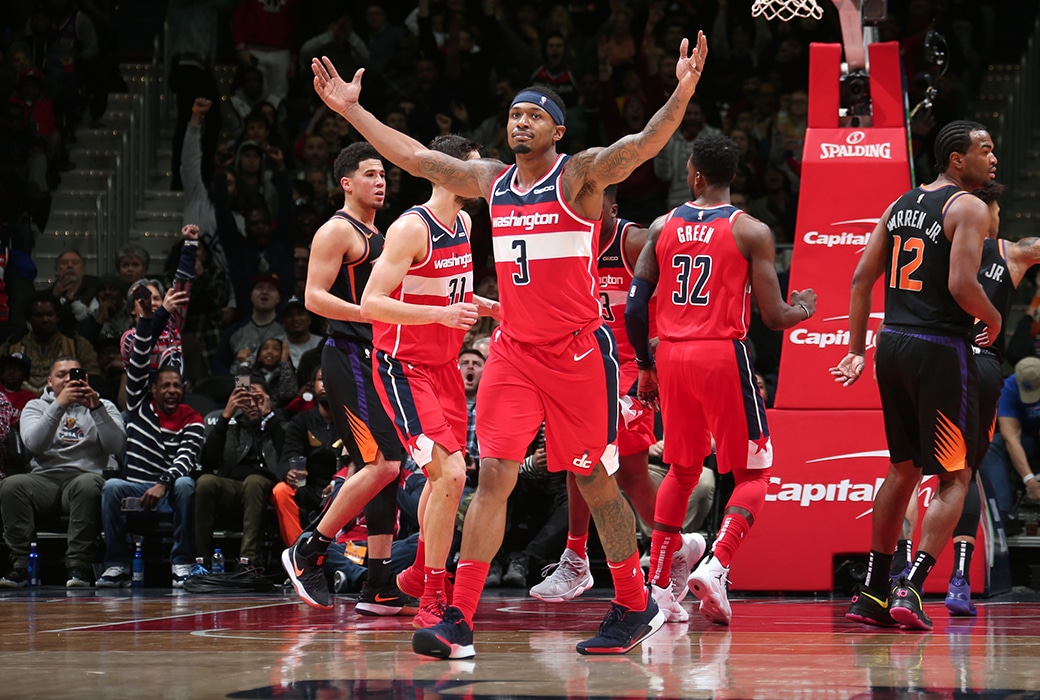 With the Nuggets down 11 in the middle of the third quarter, Nikola Jokic was thrown out of the game for chewing out a ref after a foul call.

With Jokic out of the game, the Clippers’ lead would balloon to 27 points in the fourth quarter. Bottom line: The Nuggets clearly could use some more healthy bodies back on the court.

Tobias Harris and Danilo Gallinari had 21 points apiece to lead the Clippers.

The Wizards were able to snap the Suns’ four-game win streak, but it took three overtimes to get it done.

Without John Wall (illness), Otto Porter (knee) and of course Dwight Howard (back), Bradley Beal carried the team on his back.

Beal recorded the first triple-double of his career, finishing with 40 points, 15 assists (a career-high) and 11 boards.

Twenty-one-year-old center Thomas Bryant broke out for 31 points on a perfect 14-14 shooting with 13 boards.

Kelly Oubre returned to Washington to score 20 points in 42 minutes off the bench.

After losing their first two meetings against the Raptors, the Sixers exacted a small amount of payback with a blowout win in Philly.

Ben Simmons had 26 points (on 13 shots), 12 rebounds and 8 assists, and a technical foul for sitting on a courtside seat.

Ben Simmons got T'd up for sitting on a courtside seat 🤔 (via @NBCSPhilly) pic.twitter.com/nmZhxo89zG

Both teams really struggled to put the ball in the basket, but the Heat were able to open up a 16-point lead early in the fourth. The Bucks nearly battled back, but Dwyane Wade (who else?) put the game on ice.

James Johnson had his best game of the season for the Heat, dropping 11 points with 6 boards and 4 dimes.

San Antonio was up by 2 at halftime, but got outscored by 17 in the third quarter alone. The Spurs put together a run in the fourth—and even took the lead for a moment—before James Harden iced the game.

Harden finished with 39 points and 10 assists as the Rockets try to stay afloat without Chris Paul.

The game should have been over when the Warriors went up by 18 with just under 8 minutes to play. But Dallas battled all the way back and made it a one-point game with less than a minute left.

With the game in the balance, Golden State got the ball to Kevin Durant (29 points, 12 boards, 8 assists), who calmly sank a dagger three.

Dallas has now lost five games in a row.

That he did. George played perhaps his best game of the season, dropping 43 points with 14 rebounds, 6 assists and 5 steals. Make that back-to-back 43-point games for PG-13.

George has clearly been OKC’s best player this season, and should be in the MVP conversation up to this point. The Thunder have now won four games in a row.

🗣️ PAUL GEORGE HAS BEEN ON A TEAR!