Brooklyn picked up a big win against Portland on Monday. 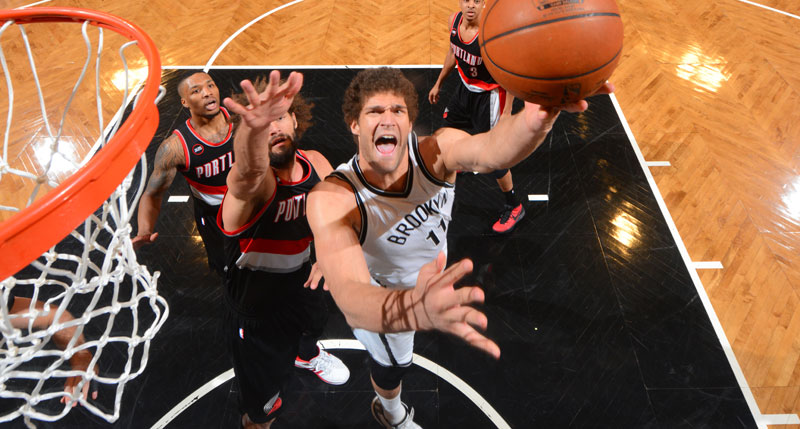 The Nets got back to their winning ways after getting blown out by the Hawks. The same duo carried the load for Brooklyn as Brook Lopez (32 points, 9 rebounds) and Deron Williams (24 points, 10 assists, 6 rebounds) have really elevated their play during the past month or so. There’s a reason Lopez was named Eastern Conference Player of the Week…two weeks in a row. He certainly continued to command the interior and look like the better brother by taking it to Robin Lopez (8 points, 7 rebounds, 2 blocks) Monday night. These two Nets players looked younger, fresher and hungrier to get back into the playoffs. Damian Lillard (36 points, 6-11 from the field) fought hard all night to keep his team within striking distance but needed more from his teammates, especially with LaMarcus Aldridge sidelined. Even in the loss, C.J. McCollum (15 points, 6 rebounds) notched a season-high fourth straight game scoring in double figures. He’s starting to find his groove with or without Lillard on the floor. Meyers Leonard (17 points, 15 rebounds, 2 steals) did finish with a strong double-double and helped cut a 22-points deficit to six in the fourth quarter. After Portland’s big man hit a hook shot with 4:38 to go in the game, Portland only trailed 89-83. Lopez, Williams and Thaddeus Young (20 points, 5 rebounds), though, would score seven quick points to turn this close six-point difference int0 an insurmountable 13-point lead. Bojan Bogdanovic (15 points, 5 rebounds) has been indispensable off the bench, bringing a certain sense of craftiness and playmaking that the Nets clearly need. Jarrett Jack (3 points, 2 rebounds) provided this earlier in the year and Bogdanovic has now taken over the role and made it his own. Not only did Brooklyn have a 25-17 advantage in assists, the East team also only had six turnovers. Portland finished with twelve. Since they are a division winner, the Blazers are practically stuck in the No. 4 seed. The Nets, though, made some important ground against the bottom of the East and now lead the Celtics by one game for the No. 7 seed.