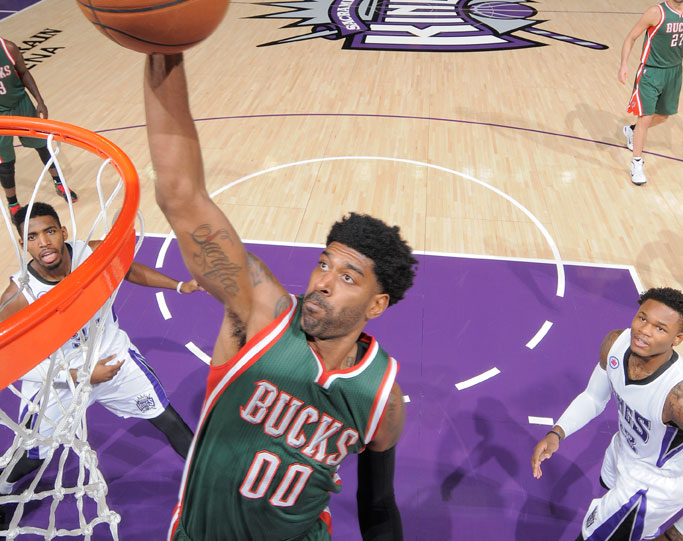 Jimmy Butler dropped a career-high 35 points to go along with 7 assists and 4 steals as the DRose-less Bulls took care of the Melo-less Knicks at the United Center. Chicago’s rising star went 11-21 from the field to lead the way, Pau Gasol added 20 and 7 and E’Twuan Moore contributed 18 off the bench. The Knicks have now lost 13 of 14 and are 5-23 to kick off the Derek Fisher era. Tim Hardaway did his thing, scoring 23 points and dishing 5 dimes, while Amar’e continued his comeback season with 16 points, 6 rebounds, 4 blocks and 2 steals. NYK was able to keep it close but simply couldn’t execute down the stretch… Think Carmelo’s having second thoughts about passing up on Chi-town?

You’ve been hearing it all season, yes, but it cannot be overstated: Anthony Davis is straight out of a video game. New Orleans’ golden child had another nasty night, posting 30 points, 14 boards, 5 blocks and 2 steals in 41 minutes of work. Tyreke Evans was missing from the Pelicans’ lineup and AD looked a touch bit more aggressive as a result. Jrue Holiday found holes in Houston’s defense throughout the night, serving up an entrée of 10 assists with a side of 16 points, 2 steals and 2 blocks. Ryan Anderson (16 points, 6 rebounds) and Dante Cunningham (15 points, 5 rebounds) were key for the Pels as well.

James Harden was coming off a combined 109 points in his three previous games but struggled to find his shot last night, going just 8-23 from the field for 21 points (he did also provide 7 rebounds and 5 assists). Meanwhile, Dwight Howard was a force inside per usual with 17 points and 13 rebounds. The Rockets will look to bounce back when they host Atlanta Saturday.

After missing 10 games due to viral meningitis, Boogie Cousins (27 points, 11 rebounds, 5 assists) made an impact in his return to the court but couldn’t convert a deep J at the buzzer as his Kings fell to 11-15 on the season. The Bucks played without Larry Sanders (suspended), Jabari Parker (out for the season with torn ACL), Ersan Ilyasova (nasal fracture) and John Henson (sprained foot) but were able to move above .500 thanks to an outstanding perimeter game; Milwaukee was outscored 46-28 in the paint but picked up the slack by shooting an absolutely bonkers 10-14 from beyond the arc.

Brandon Knight had 20 points, 5 rebounds, 4 assists and 2 steals, Jared Dudley put up 19 points and 5 rebounds and OJ Mayo chipped in with 19 of his own including 17 in the first quarter. Zaza Pachulia hit one of two free throws to put his team up by one with 6.8 seconds left. Cousins proceeded to miss the potential game-winning, long two-ball. Ben McLemore (22 points) and Rudy Gay (20 points, 9 rebounds, 6 assists) were bright spots for SAC in defeat.

Kevin Durant’s first half went like this: 19 minutes, 10-13 shooting, 30 points. The reigning MVP might have gone for 60+ if it weren’t for a sprained ankle on the possession prior to halftime that caused him to sit for the rest of the night. Hmm… is it possible that Bay Area native Lil B was on hand in Oakland last night to resurrect the KD curse? The world may never know. Moving on… Steph Curry and Draymond Green each flirted with triple doubles, posting 34 points, 9 assists, 7 rebounds, 4 steals and 16 points, 9 rebounds and 9 assists respectively. Curry’s fellow splash bro Klay Thompson came up big as well with 19 points and 5 assists as GSW earned its 22nd (!) win of the year. Russell Westbrook’s 33 points and 8 rebounds were good, just not good enough against the league’s most dangerous offense.