The Bulls stay hot with a W in Milwaukee, the Suns beat the buzzer with a Tyson Chandler alley-oop & more! 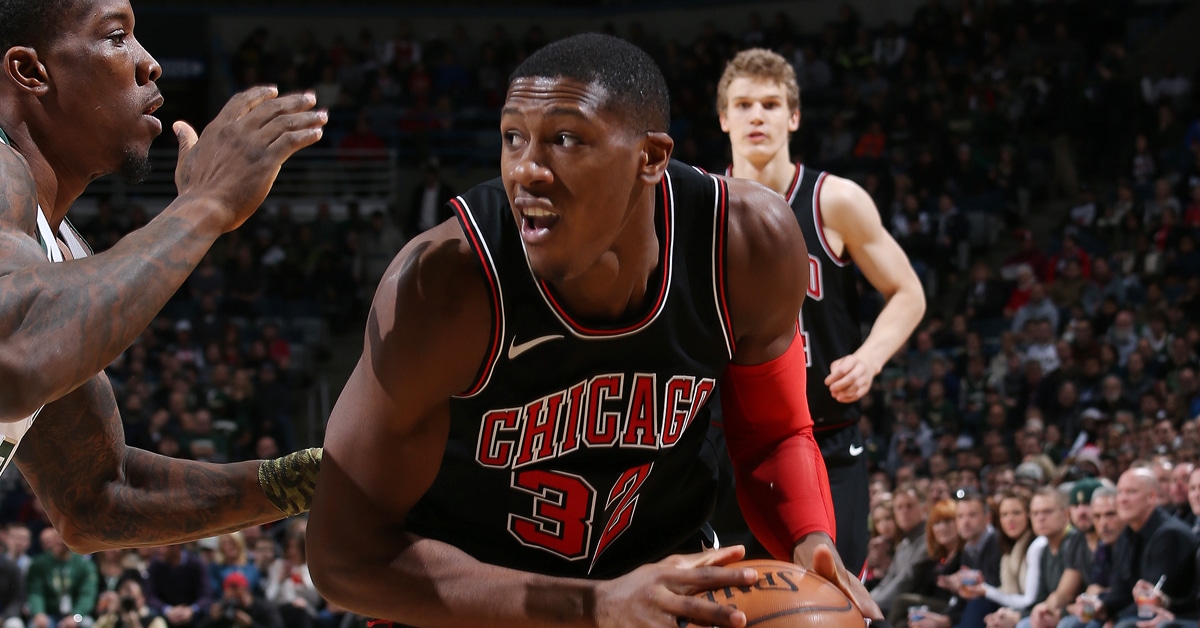 Detroit began with a 40-point first quarter and never looked back.

Tobias Harris missed just one shot on the night, scoring 21 of his game-high 30 points in the first quarter.

Andre Drummond (21 points and 18 boards) led a dominating attack at the rim and got the Pistons going in transition for easy buckets.

After the game, Pistons guard Langston Galloway dunked the gender reveal of his baby. Congrats to Mr. and Mrs. Galloway!

After winning 12 of their last 13 games and taking first place in the East, Toronto shot just 33.7 percent from the field in an ugly loss.

Dallas managed to score just 13 points in the fourth, but the Raptors hardly took advantage—scoring just 16 points themselves in the final frame.

The score was tied at 68-68 to start the fourth quarter when Miami detonated for 39 points.

The Magic, who were without Nik Vucevic and Aaron Gordon, didn’t have the firepower to match, and ended up dropping their ninth-straight game.

Chicago was 3-20 when Nikola Mirotic made his season debut on December 8. Since then, the Bulls have gone 8-2. Coincidence?

The Bulls are swishing and dishing as they look to win their 8th of their last 10. What’s changed in Chi-Town❓ (via @NBATV) pic.twitter.com/UAmXTwVTRO

The Bulls committed only 7 TOs to Milwaukee’s 20.

Kawhi Leonard continues to play more minutes and look more comfortable on the court. His 26 minutes and 21 points both were season-highs as San Antonio cruised to another win.

Kawhi is getting back into form 📈📈📈 (via @spurs) pic.twitter.com/rtKi7bMudJ

The score was tied 54-54 with 8 minutes left in the third. Two minutes later, the Spurs were up by 11, and the Nets were never able to battle back.

After handing the Warriors their worst loss of the season on Saturday, Denver continued their dominant ways against the Jazz.

Denver had a 16-point lead by halftime, and it only grew in the second half.

Jamal Murray, who quietly put together a very solid December, put up 22 points (9-15 FG) with 8 boards.

After missing nine games with a groin injury, Devin Booker wasted no time getting back to his scoring ways. The 21-year-old dropped 32 points before fouling out late in the fourth.

After the Grizzlies’ Jarell Martin tied the game with a putback dunk with 0.6 seconds left, the Suns designed a play for Tyson Chandler to catch a lob over the basket (yes, you can do that).

For the Suns, it was Tyson Chandler securing the dub! pic.twitter.com/5uFSvGWWSb

(Shout out Dragan Bender for the perfect pass.)

Thanks to a 41-point second quarter, the Clippers went into halftime with a cushy 18-point lead. That lead would only grow to 27 by the end of the game.