Dwyane Wade scored 15 fourth-quarter points to lead the Heat to a comeback win on Wednesday. 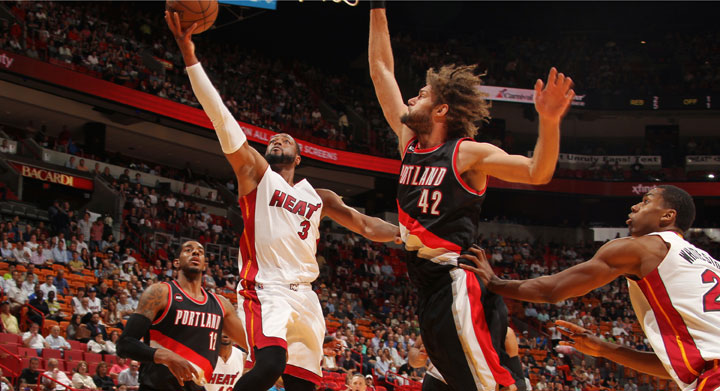 The Cavs started slow but got back on track to eventually blow out Brooklyn by 25.

Seven Cleveland players scored in double figures. Timofey Mozgov and JR Smith led the way with 17 points apiece. The Cavs shot 54.9 percent from the field and 51.7 percent (15-29) from 3-point land. Five of those threes came from JR Smith, who’s been a nice fit since coming over from New York. James Jones, LeBron, Iman Shumpert and Matthew Dellavedova each added two treys of their own.

Deron Williams (20 points, 6 assists) was the bright spot for BK in the loss. He’s lowkey played pretty well this season, averaging 13 and 6 per game. It goes unnoticed because of what we were used to seeing of him in Utah.

Dwyane Wade scored 32 points, and he was simply on fire down the stretch to lift the Heat to a come-from-behind win against the Trail Blazers. He was hitting all kinds of shots — Portland just couldn’t contain him. DWade has been tremendous as of late. He’s definitely showing signs of vintage Flash. Miami is currently sitting at that 7th spot in the East.

Hassan Whiteside posted 12 points, 10 rebounds and 6 blocks in the win. Goran Dragic added 20 points and 11 assists. Luol Deng contributed 24 points. The Heat shot 52.9% from the field including 7-10 from 3-point range.

DeMar DeRozan dropped 21 points and pulled down 7 rebounds, Jonas Valanciunas posted 15 and 15 and T. Dot earned win number 41 against the young T-Wolves. DeRozan shot only 4-14 from the field, but he made up for it on the charity stripe by sinking 12 of 12.

Andrew Wiggins (15 points) made his debut in his hometown of Toronto. He didn’t make much of an impact, but his teammate Kevin Martin exploded for 37 points in the loss.

Zach Lavine is a video game:

Nikola Mirotic has been invaluable to this year’s Chicago Bulls squad. Dude has adjusted to the NBA pretty well, I’d say. Last night in a home tilt against the Pacers, the rookie came off the bench to score 25 points and rip down 9 rebounds to go along with 2 steals. More importantly, Chicago won the game.

After losing to the friggin’ Knicks, the Spurs got back on track with a win against Milwaukee. Danny Green’s 20 points and 8 rebounds and Tim Duncan’s 19 points and 7 assists propelled San Antonio to victory on the road.

The night before, Coach Popovich called the loss to New York a “pathetic performance,” and his team made sure it wouldn’t make the same mistakes against the Bucks. The Spurs shot 50 percent, shot 8-for-20 from beyond the arc and got the W despite the absence of Manu for the second straight game. The defending champs have now won eight of its last 10 games, while the Bucks have lost 11 of their last 14. The Greek Freak led his team in the loss with 19 points. They’ll try to get back on track against the Nets on Friday.

So that Russell Westbrook kid can ball a little bit, huh?

Russ had yet another monster of a game Wednesday night — he put up 36 points, 10 assists and 5 steals in 40 minutes of play. He did shoot just 8-26 from the field and had 7 turnovers, but he shot 19-22 from the free throw line; those 19 FTs tie James Harden for most made in a game this season. Strangely (and awesomely), 18 of his points came during two different individual runs — one in the third quarter, one in the fourth — which occurred throughout two and a half minutes of play.

Boston led 57-53 at halftime, but OKC took control in the second half. The Celtics made it close again at the very end, but it was too little too late. Enes Kanter was a big factor with 22 points and 10 rebounds as the Thunder ended Boston’s five-game win streak. Marcus Smart put up 25 points and 9 boards in the loss.

The Magic trailed 70-48 in the third quarter but came roaring back to cut the lead to just two with 17 seconds remaining. Devin Harris went one-for-two from the line, and Victor Oladipo had a chance to tie the game but missed his 3-point attempt.

Orlando’s comeback was due in large part to Elfrid Payton’s terrific play. The young’n dropped his first career triple-double with 15 points, 12 assists and 10 rebounds. He did, however, miss an open J with 30 seconds left that would’ve given his team the lead. Dirk Nowitzi had it going last night, as the 7-footer went for 25 points and 8 rebounds to catapult the Mavs to victory.

Rajon Rondo has eyes in the back of his head:

Sacramento was without Boogie Cousins due to a right calf strain, which, as expected, proved to be a big problem for the Kings.

Chris Paul had 30 points and 11 assists, JJ Redick dropped 27 and Blake Griffin posted 19 and 10 in his third game back from his elbow injury. Hedo Turkoglu started just his second game of the season but provided a big lift with 19 points including five 3-balls. Did he just earn himself increased minutes in the playoffs? The game was tied early in the fourth, but the Clips went on a big run thanks to sharpshooting by Redick and Turkoglu. Sac-town couldn’t get back into it.

The league’s top two teams (record-wise) went at it again, but the game didn’t hold the same excitement factor as the first matchup, in which Atlanta came out on top. A big part of the reason was that Klay Thompson was out with an ankle injury, Kyle Korver was absent with a broken nose, and Thabo Sefolosha (calf injury) and Mike Scott (broken toe) still don’t have timetables for their returns.

The Wizards’ win against the Jazz and the Hawks’ loss meant Atlanta couldn’t yet clinch the division title.

Washington almost blew this one. The Wiz led by four with 12 seconds on the clock. Gordon Hayward finished an alley-oop dunk off the inbound, which took no time off the clock. Then, John Wall turned the ball over instantly by dribbling it out of bounds off his leg. Hayward missed an ensuing 3-ball that would have put his team up by one. After two JWall free throws, Paul Pierce ended the game with a steal.

The Sixers ended their four-game losing streak (what’s four games after what they had to endure to start the season?!) with their third win over Detroit this season.

Five Philly players reached double-digits, led by Ish Smith with 15 points. A game after posting a career-high 20 assists, Reggie Jackson got his first triple-double with 11 points, 11 rebounds and 10 assists in the loss to the lowly Sixers. Kentavious Caldwell-Pope was the only other Piston to contribute very much of anything offensively; the talented youngster scored 20 points on 7-16 shooting.