Post Up: DeMarcus Cousins Sparks Warriors to Win Over Lakers 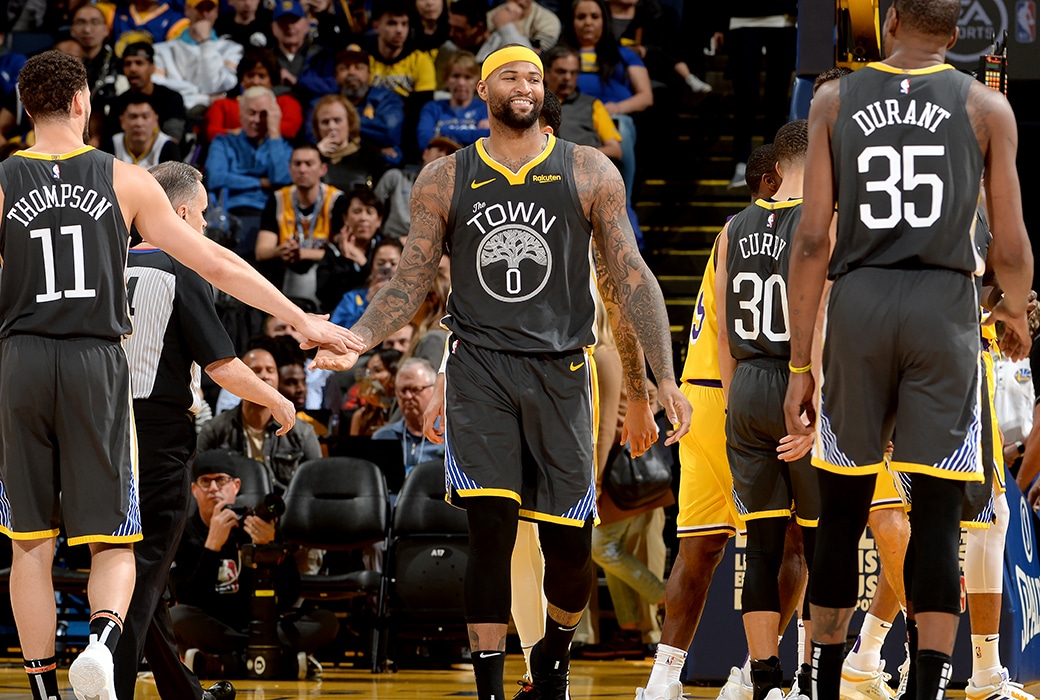 L.A. rallied all the way back from a 23-point third-quarter deficit to take the lead with 6:18 in the fourth.

Lou Williams scored 26 of his game-high 39 points in second half and finished with a +19 plus/minus.

After winning their second game in a row, Charlotte is now back where they’ve been most of the season: at .500.

Orlando outscored the Nets by 17 points in the second half to pull away with the dub.

Giannis Antetokounmpo finished with a game-high 37 points with 10 boards and a +22 plus/minus.

Dallas outscored the Cavs by eight in the fourth quarter to close out the game.

Luka Doncic finished with a game-high 35 points with 11 boards and 6 dimes.

Indiana rallied in the second half to snap a four-game losing streak without Victor Oladipo.

San Antonio had a 22-point lead with 5:55 remaining and nearly blew all of it by the final minute.

Luckily for the Spurs, Tim Frazier missed a three that would have tied the game with just seconds remaining.

LaMarcus Aldridge finished with a game-high 25 points with 14 boards and a +18 plus/minus.

It's gotta be Manu under that mask… 🦇 (via @spurs) pic.twitter.com/oRbOOLfG9Q

Los Angeles took a one-point lead with 11 minutes left in the fourth quarter, and then the Golden State onslaught began.

Over the next eight minutes of game clock, the Warriors opened up an 18-point lead to close out the game.

Earlier in the third quarter, Boogie Cousins (18 points, 10 boards, 4 assists) swung the momentum in the Warriors’ favor after throwing down a Dunk of the Year candidate (his achilles is looking just fine).

That was FILTHY, Boogie 💀💀 (via @warriors) pic.twitter.com/fTpPSNnTH9

After nine lead changes and 11 ties, Denver was able to gut out the win in Minnesota.

Denver has won six in a row.

Trae Young dropped 17 of his 27 points in the fourth quarter as Atlanta rallied late in the game.

John Collins tied a career-high with 35 points while adding 16 boards and had a +15 plus/minus.

Phoenix lost their 10th in a row.

Houston built a 13-point lead heading into halftime and never looked back. By the end of the fourth, the Rockets’ lead had ballooned to 29.

James Harden had one of his most complete games of the season, finishing with game-high 43 points (on 22 shots), 12 boards, 5 assists, 6 steals, 4 blocks and had a +31 plus/minus. Sheesh!

Sacramento had a 13-point lead in the third, only to see the game tied by 7:54 in the fourth.

Luckily for the Kings, Buddy Hield was red hot. He scored a game-high 34 points with 7 treys and hit a number of super-clutch buckets.