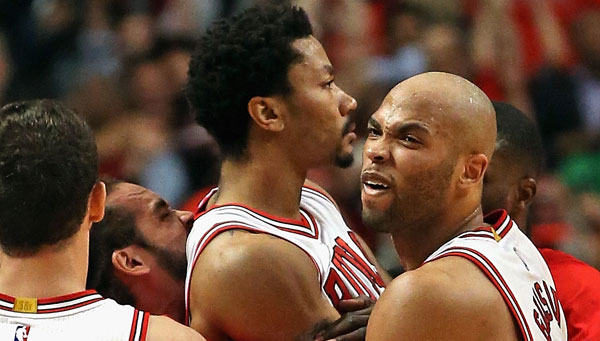 For most of the game, the Chicago Bulls couldn’t buy a bucket. Just over 30 percent of their field-goal attempts were falling, yet they remained in the game with their trademark defense.

LeBron James wasn’t getting his shot to fall, either, but was doing everything else on the court—passing Steve Nash, Tony Parker and Larry Bird in career Playoff assists and racking up a Playoff career high 14 dimes on the game.

But Derrick Rose, the man who had just played in his first full Playoff series since 2012, was just as excellent. Chicago’s own point guard not only got to the line in Game 3, he made 9-10 from the stripe. He scored 24 points in the second half alone, and scored or assisted on 19 of Chicago’s 25 fourth-quarter points.

And with 3 seconds left, Rose took the game into his own hands and banked in a last-second three-pointer that fans will be talking about for a very, very long time.

Doc Rivers as the Clippers’ general manager and the coach received scrutiny when the Clippers traded for his son. The younger Rivers made his coach proud as a GM and as a father.

Austin Rivers (playoff career-high 25 points, 6 rebounds) propelled Los Angeles to a 124-99 convincing blowout win against the Houston Rockets. The shifty point guard remained on the court during the entirety of a 20-3 run in the third quarter that clearly put L.A. in front for good. Rivers scored 15 points on 6-8 shooting during this explosion, helping give Los Angeles a 99-76 lead.

Every time the ball was in his hands, it felt as though something good was about to happen. It might seem like this performance by Rivers is simply an anomaly, but he has been playing well all three games as he is +15 in the series.

Early on in the game, Chris Paul (12 points, 7 assists) gave the Clippers a boost with his crisp passing. He might not have a playoff-defining game as he did in Game 7 against the Spurs, but CP3’s presence simply gave the Clippers just enough more depth that the Rockets suddenly became outmatched.

Throughout the first half, though, the Rockets continued to stay within striking distance every time it seemed as though L.A. was about to pull away. All five Rockets scored in double figures with James Harden (25 points, 11 assists) leading the way in scoring and Dwight Howard (14 points, 14 rebounds, 2 blocks) making his impact felt in the interior. Even though Houston kept it close until L.A.’s outburst in the third, it felt as though the team was simply holding on for dear life.

The problem is on the defensive end of the floor. Throughout the regular season, this team shot and pounded their way to 56 wins while sporadically playing lockdown defense. Then in the first round, the Mavericks’ self-destruction helped a potentially tough series turn into only five games. Now, the Rockets just allowed the Clippers to score 124 points on 55.4 shooting from the field and 44.8 percent on 3-pointers. Furthermore, L.A. won the rebounding battle 50-43.

In terms of the Clippers’ defense, J.J. Redick (playoff career-high 31 points, 11-14 from the field, 5-6 on 3-pointers) shouldn’t be overshadowed. He will be talked about the next few days for his playoff career-high in points and his silky smooth jumper. More importantly, however, is the fact that the former Blue Devil has discovered a way to guard Harden to a degree by avoiding fouls and ignoring any and all fakes by the Houston shooting guard. Harden, who is averaging just under 10 free throws per game, only managed to shoot and make five Friday night.

As great as the Clippers guards were, DeAndre Jordan (6 points, 15 rebounds, +36) still snatched 15 boards while Blake Griffin (22 points, 14 rebounds) became he first player since Dwight Howard in 2009 to reach at least 10 rebounds in his first 10 games of the playoffs. With CP3 back and Rivers finding his groove, Griffin didn’t have to play point forward as much and settled into a comfortable role in the offense. His versatility is going to be crucial for L.A. as this series moves along.

The Clippers starting unit—along with Rivers and Jamal Crawford (12 points, 6 steals)—is currently as lethal as it has been all season long. If the Rockets want to tie this series up, they will need to work harder on defense while finding ways to get to the line. In the Rockets’ three wins against the Clippers this season, Harden has 45 free throw attempts. In the four losses, he only has 22. If Harden can draw fouls, the Rockets have a chance to win…which has been a common theme this season.