Jae Crowder's winning jumper secured the seventh spot in the East for the Celtics. 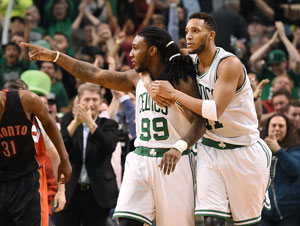 Starting off with the shot of the night—Jae Crowder’s game-winning 3 with 0.8 seconds remaining on the clock:

Before that shot, the Celtics trailed the visiting Toronto Raptors by as many as 15 in the second quarter. But by halftime, they managed to cut the deficit to 7. Evan Turner (14 points, 9 assists) and the Cs inched closer in the third, finally tying it up and taking the lead with a pair of Tyler Zeller (12 points, 8 boards) free throws at the 5:07 mark. Kyle Lowry (16 points, 7 boards) and the Raps stuck around though, keeping the game neck-and-neck in the fourth, until Crowder (9 points, 2 steals) did his thing.

The win situated the Celtics in the seventh spot in the East, matching them up against the Cleveland Cavaliers for the first round of the Playoffs.

With their win at home against the Washington Wizards last night, the Indiana Pacers kept their Playoffs hopes alive while eliminating the Miami Heat’s chances. The double-overtime win wasn’t pretty though. The Pacers shot just 38.1 percent from the field (less than 30 percent in the first half), only a tad better than the Wizards’ 35.6.

After trailing by 12 points earlier in the game, the Pacers managed to take a lead nearing the end of the fourth quarter. But John Wall (16 points, 11 assists) tied things up again with less than a minute left. He missed two jumpers afterward that would’ve given the Wiz the win, so things headed to OT. At the end of the first extra period, Paul George (10 points) hit this shot with 22 seconds left on the clock:

After scoring just 4 points apiece, the two teams headed to 2OT. Then some shots started to finally fall thanks to David West (15 points, 8 rebounds), CJ Miles (25 points, 8 rebounds), and George Hill (24 points, 9 rebounds, 10 assists). Now, the Pacers are prepping for their final game of the regular season—perhaps their final game of the year. To avoid a postseason-less exit, they’ll need to beat the Grizzlies in Memphis and/or hope for the Nets to lose to the Magic in Brooklyn.

The Clips led by as many as 30 points during the contest, while the Suns trailed each minute. After a 32-26 first quarter, L.A. went off for 37 in the second. They held the Suns to just 17 in the period to take a 69-43 halftime lead and never had to look back.

Seven of the nine Suns who saw minutes finished in double-figures, but it wasn’t enough to take down the Playoffs-bound Clippers.