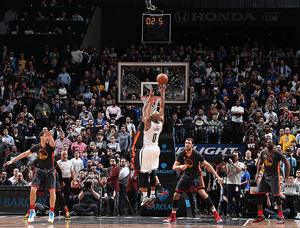 With Kyle Lowry taking the night off for rest yesterday in Philly, DeMar DeRozan stepped up to lead the Toronto Raptors past the hometown 76ers. He scored a season-high 35 points—15 of those came in the first quarter alone—to help T-Dot end its five-game losing streak.

Lou Williams added 21, as the Raps’ bench outscored the Sixers’ 66-45. The game remained close throughout the first three quarters. In the fourth, the Raptors went up by double-digits and maintained a lead until the final buzzer sounded.

Nerlens Noel finished with 17 points for Philadelphia, shooting a perfect 7-7 from the field. Ish Smith added a career-high 19 points and 9 assists off the bench in the loss.

Who had the clutch gene in last night’s Golden State Warriors’ visit to the Barclays Center in Brooklyn? This guy:

Jarret Jack might’ve finished with a modest 9 points last night, but he had the 2 most important ones that won the game over the League’s best team.

Before Jack’s jumper seen in the video above, Stephen Curry caught fire as he usually does. He scored 18 of his 26 points in the fourth quarter and tied the game at 108 with just over a minute left. Andrew Bogut had a season-high 16 points, but his bad pass went out of bounds with 20.6 seconds on the clock and the game still tied. That put the ball in the Nets’ hands leading to Jack’s winning shot.

Brook Lopez led the Nets with 26 points, and Deron Williams added 22 in the thrilling win.

The first was Markieff Morris (13 points) after his hard foul on Dragic was ruled a Flagrant 2 by the officials:

The second and third were Hassan Whiteside (17 points, 10 rebounds) and Alex Len (10 points, 11 rebounds) after this little tussle:

Despite all the roughhousing, the final result turned out pretty good for Miami. Tyler Johnson finished with a career-high 26 points, and Dragic added 21 points (including 10 in the fourth) to get the dub over his former team. Dwyane Wade finished with 16 points, 9 assists, and 4 steals.

Gotta start this recap off with the best Vine of the night:

Glen Davis (12 points) just doing his thing—videobombing teammate Chris Paul who finished with 26 points and 14 assists in the Clippers’ win over the Minnesota Timberwolves to conclude a four-game road trip. Fun times.

The Clips went on a 17-2 run in the first quarter of last night’s game at the Target Center. They had a 36-23 lead after 12 minutes of play. In the second quarter, the Timberwolves had the upper hand. They outscored their visitors by 15 to take a 2-point lead at halftime. A couple highlights from those second 12 minutes, courtesy of the young Wolves:

In the final period, CP3 and the Clips came out on top, holding the home team to just one successful field goal with 10:18 left in the game. Minnesota’s remaining 16 points in the fourth came solely from free throws.

Ricky Rubio finished with his first triple-double of the season (fourth in his career) of 18 points, 12 rebounds, and 11 assists. Six of the seven Wolves who saw minutes scored in double-figs, but Los Angeles came out with the victory.

The New Orleans Pelicans’ five-game winning streak came to an end last night in Dallas, as Monta Ellis (20 points) and the Mavericks took care of the win on their home floor. Rajon Rondo contributed 19 points (13 in the first quarter), and Richard Jefferson finished with 16.

The Pelicans had a 3-point advantage at the half, but then the Mavericks opened the third quarter on a 16-2 run. They outscored the Pelicans 25-13. In the fourth, both teams finished with an even 22 points, and Dallas ended up winning by 9. Norris Cole was the high-scorer for the Pels with 19.