Kyrie Irving dropped a career-high 57 points, and the Cavs topped the defending champs in overtime on Thursday. 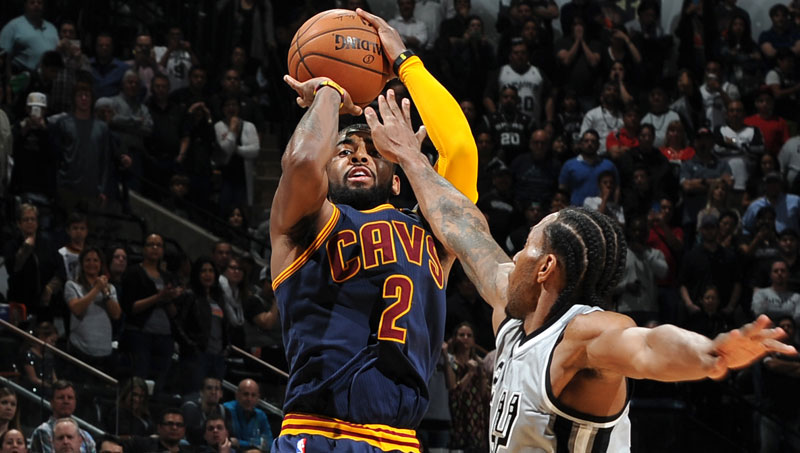 Rodney Stuckey dropped 25 to go along with 6 rebounds and 6 assists, and the Pacers edged the Bucks in overtime. Luis Scola gave the Pacers big minutes off the bench with 17 points and 15 boards. George Hill added 17 points, and CJ Miles provided 14. Indiana went on a 9-0 run in the extra period to seal the deal.

Zach Randolph and Marc Gasol rested this one out, but the struggling Wizards should be satisfied with any win they can get at this point. John Wall (21 points, 6 assists) and Marcin Gortat (22 points, 9 rebounds) took it to Memphis in the first of two TNT games Thursday night.

The Wiz trailed by nine points early on, but the home team fought back and established a big lead by halftime. Randy Wittman’s squad capitalized on Memphis mistakes, winning points off turnovers by a margin of 27-14. JaMychal Green (13 points, 6 rebounds) and Jarnell Stokes (13 points, 8 boards) were bright spots for the Grizz in a losing effort.

Gordon Hayward went for 29 points and 7 assists, and Rudy Gobert went crazy and finished with 19 points and 22 boards as the Jazz upset Houston.

Six Jazz players attained double figures, and James Harden was limited to only 15 points on 3-13 shooting. Corey Brewer led the way for Houston with 25 points off the bench. The aforementioned Gobert got up for a monster jam on Terrence Jones:

Kyrie Irving poured in a career-high 57 (!!) points as the Cavaliers edged San Antonio in overtime in the second of TNT’s double-header. The kid was zoned in — he was simply impossible to guard.

He also had the clutch factor going. Kyrie pulled Cleveland to within three points when he hit a three-pointer with 31 seconds remaining in regulation. Then with four seconds left, Irving made yet another three-ball to tie the game at 110. He went on to score 11 in the extra period. Peep the video below for footage of the show he put on:

Tim Hardaway Jr. had himself a game in a win over the Lakers with 22 points on 8-14 shooting off the bench. Derek Fisher received a warm welcome back to Staples Center — where he played a majority of his career — and proceeded to get a W in his return to the LA’s floor.

Jordan Hill has been a pleasant surprise in a dismal Lakers season. The sixth-year big man dropped 19 points and pulled down 10 rebounds in a loss to the Knicks last night. Jeremy Lin added 14 points and 7 assists off the bench, but Los Angeles failed to get the better in the matchup of two lowly teams.