Khris Middleton hit a buzzer-beating three to lift the Bucks over the Heat on Tuesday. 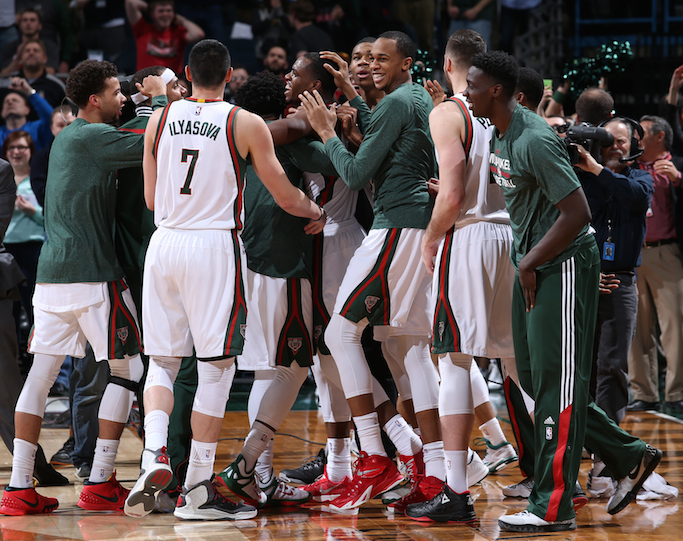 The Raptors trailed by double digits but made it a game again midway through the fourth quarter. DeMar DeRozan (22 points, 10 rebounds) hit a jumper with under six minutes left to give his team a 91-90 lead. However, Detroit would escape down the stretch thanks to big plays from Jackson and Tayshaun Prince. Down by 2, Lou Williams (19 points) missed a contested 3-ball that would have won it with 1.6 seconds left. Kyle Lowry left the game in the second quarter with back spasms and wouldn’t return. The Pistons got the win despite T. Dot fans outnumbering Detroit fans at the Palace.

We’re mid-NCAA Tournament action, but that doesn’t mean the madness can’t extend to the pro game. If you were watching last night’s Bucks-Heat matchup, you know exactly what I mean.

Jerryd Bayless (6-foot-3) won a jump-ball against Michael Beasley (6-foot-9) with 10.8 seconds remaining in the game. Bayless then drove the lane and missed a layup, but the loose ball found its way into the hands of a falling-out-of-bounds Zaza Pachulia, who passed it to Khris Middleton for a miraculous game-winning 3-ball at the buzzer. Easily one of the crazier finishes of the season.

The Bucks overcame a huge deficit and finished the game on an 18-3 run. Ersan Ilyasova (19 points, 11 rebounds, 3 blocks), The Greek Freak (16 points, 10 rebounds, 3 blocks) and Pachulia (14 points, 11 rebounds, 7 assists, 5 steals) were key factors in the comeback. Miami took a big blow when it lost Hassan Whiteside in the second quarter due to a cut on his right hand that required 10 stitches. Dwyane Wade dropped 21 points and nabbed 3 steals, while Goran Dragic went for 16 points and 6 dimes.

The Lakers had it going offensively, but they simply ran into a monster Tuesday night. Russell Westbrook (27 points, 11 assists, 2 steals), Enes Kanter (25 points, 16 rebounds) and Dion Waiters (23 points, 10-16 shooting) combined for a whopping 75 points, and OKC dominated LA on the boards, 49-28.

Kanter had a double-double in the first quarter, and the Thunder put up 68 points by halftime. Jordan Clarkson (30 points, 7 dimes, 3 blocked shots) and Jeremy Lin (19 points, 7 assists) did their best to keep it close, but Russ & co. were too much to handle, and the Lakers lost their 10th game in 12 outings.

DJ Augustin and Westbrook linked up for one of the dirtiest oops of the year:

Monta Ellis poured in 38 points — matching his season high — and the Mavs took care of the defending champs on their home floor. Dallas is now teetering on the edge of the sixth spot in the West.

Ellis had been torching the Spurs this season; he’s now averaging 34 points in three games against San Antonio. Tuesday night’s performance was especially important coming off an awful 4-22 shooting night Sunday in a loss to Phoenix. Chandler Parsons (15 points, 6 boards, 2 steals) and Dirk Nowitzki (15 points, 13 rebounds) were key contributors, as well. Dirk surpassed 10,000 rebounds in his career. Manu Ginobili returned to the floor after missing four games with a sprained ankle. He played 16 minutes and put up 7 points in the loss.

Rocking the throwback Rochester jersey, DeMarcus Cousins was a man on a mission who finished up with 33 points, 17 rebounds, 4 steals and 4 blocks. Not bad all in a night’s work.

Aside from the sensational statline, Boogie also made the game’s most important play. Cousins poked the ball away from a driving Hollis Thompson on Philly’s final possession. Ray McCallum scooped it up and dribbled out the remaining seconds. Rudy Gay put up 21 points, 8 rebounds and 2 blocks. Nerlens Noel was a bright spot in the loss; the young’n dropped 14 points to go with 10 boards and 6 blocks. The Sixers have now lost 16 straight games on the road.

Boogie showed off his passing skills:

And Robert Covington put his elder, Andre Miller, on a poster:

And neither are the rest of the Golden State Warriors. The baby-faced assassin was sensational Tuesday night, going for 33 points and 10 assists including some plays that’ll end up on the end-of-year highlight reel. Andre Iguodala dropped 21 points, Klay Thompson added 16 and Draymond Green posted 14 points, 11 boards, 8 dimes and 3 blocks. The Dubs shot 60 percent (50-83) from the field. Holy crap.

Oh yeah, and Golden State clinched its first division title since 1976. Damian Lillard put up 29/7/5 and CJ McCollum had 23 points and 3 steals, but the Warriors would not be denied. How far do you see this team going?