The Warriors pick up their first win and Russ and AD put up huge numbers. 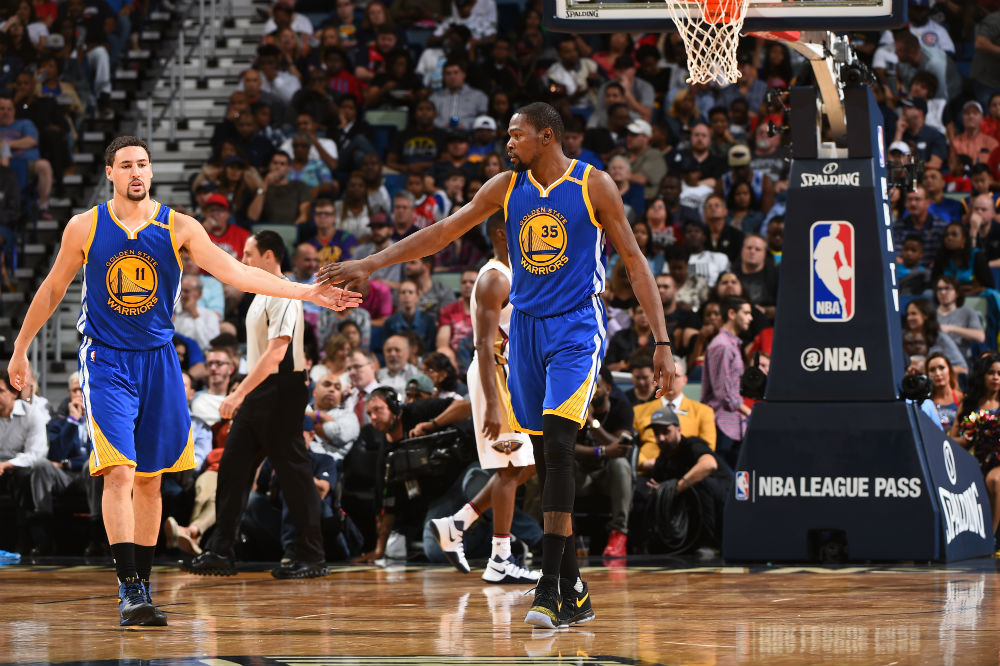 DeMar DeRozan has quietly started the season on fire. After dropping 40 in his first game, he scored 32 on Friday night against the Cavaliers. He hasn’t added a three-point shot to his game, but he’s getting more efficient with his shot-making, converting on over 50% of his looks so far.

DeRozan helped the Raptors stay close to the Cavs throughout the game, but he didn’t get much support. Rookies Pascal Siakam and Jakob Poeltl stood out in their limited minutes, but big games from Kyrie Irving (26 points, 6 rebounds, 6 assists), LeBron James (21 points, 8 rebounds, 7 assists), and Kevin Love (18 points, 10 rebounds, 2 blocks) proved too much for the Raptors to overcome.

Raise your hand if you thought Jeremy Lin would register 21 points, 9 rebounds and 9 assists. That came out of nowhere. Brook Lopez added 25 points and Sean Kilpatrick caught fire late in the game. He wound up with 18 points, hitting all 4 of his three-point attempts. The Nets’ largest lead was 14. They built that up during the fourth, when they outscored the Pacers 31-15. Paul George got 22 points and 9 boards in the loss.

The Pistons used a big team effort to blowout the Magic, riding 18 points from Tobias Harris, 17 from Marcus Morris, 16 from Ish Smith and 12 from Andre Drummond. Besides Aaron Gordon flying through the air for dunks, the Magic had a tough game. They scored just 9 points in the second quarter and couldn’t recoup the lead after that. Drummond also picked up the 28th 20-rebound game of his career.

Russell Westbrook is a BEAST. He had 51 points, 13 rebounds and 10 assists in the Thunder’s overtime win against the Suns. It was the NBA’s first 50-point-triple double since Kareem Abdul-Jabaar in 1975. Let that sink in.

Westbrook relied heavily on Andre Roberson and Victor Oladipo for help in beating the young Suns. Roberson had 9 points, 11 rebounds and 5 steals and Oladipo had 21 points.

The Suns played fast all night long, but only had four players in double-digits. Westbrook willed the Thunder to victory with his go-ahead layup with 7.6 seconds left in overtime and did everything else before that.

After trailing by as many as 19, Kemba Walker led the Hornets back with his 24 points. More than Walker’s offense, it was the Charlotte defense that got the win. The Heat had only 34 points in the second half. Hassan Whiteside (20 points, 15 rebounds) and Goran Dragic (14 points and 9 assists) played well for the Heat in the loss.

Behind 26 points, 8 assists and 7 rebounds from James Harden, the Rockets escaped Dallas with a win. The Beard hit backbreaking three’s in the third quarter to secure the lead. Without Dirk Nowitzki (stomach ailment), the Mavs didn’t have enough to overcome the Beard’s big game and 27 points from Trevor Ariza. Harrison Barnes had a good home opener. He had a career-high 31 points but the Mavs only had 13 assists on their 35 field goals.

The revamped Jazz picked up their first win tonight in the way they’ll be picking up the rest of them–as a team. They had five players in double-figures, led by George Hill’s 23. He used his veteran savvy against the Lakers’ young guns to help Utah outlast their visitors.

The youngins’ played well again. Their chemistry is coming along quickly and while Brandon Ingram didn’t play, and Julius Randle, Jordan Clarkson and D’Angelo Russell didn’t have loud stat-lines, they weren’t afraid of the clutch moments, hanging with the Jazz until the end.

Rudy Gobert and Derrick Favors combined for 22 rebounds and 6 blocks. They muscled the Lakers frontline around all night.

Anthony Davis is 23-years-old. Through his first two games he has 95 total points, 33 rebounds, 8 assists, 9 steals and 6 steals.

Against the Warriors on Friday night, Davis was on fire again, showing no fear against Kevin Durant, Stephen Curry and their mighty crew. He didn’t stop fighting until the final buzzer sounded.

The Warriors lead grew after Curry hit for 8 straight points in the third quarter. After that, the Dubs were in control. Durant had 28 points and while Curry finished with 23, he shot only 4-10 from distance.