LeBron, Kyrie and Kevin Love were able to edge out Isaiah Thomas and the Celtics in a possible Eastern Conference Finals preview. 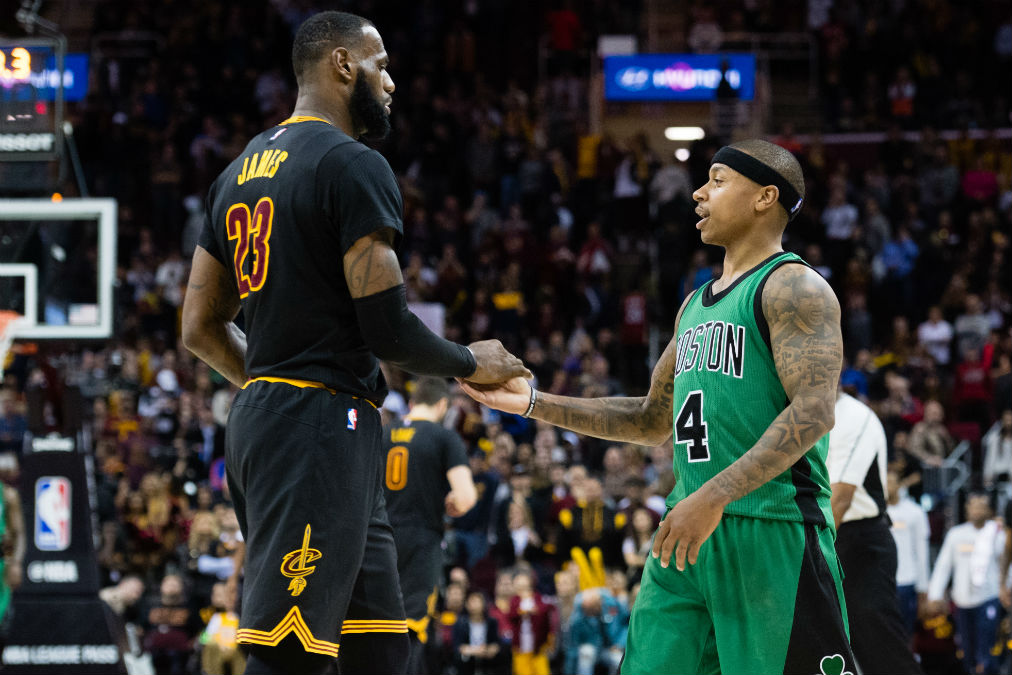 Russell Westbrook was ejected in the third quarter and the Thunder didn’t have the firepower to compete after that. OKC shot just 33% for the game and only 4-22 from downtown. They trailed by as many as 37 at one point. Marc Gasol led the Grizzlies with 25 points, 8 rebounds and 5 blocks. Mike Conley’s dealing with a sprained toe, but Troy Daniels stepped up in his place. He shot 8-12 and made 6 three-pointers for 22 big points.

The Cavs’ Big Three was huge tonight. Kyrie Irving had 32 points, 12 assists and 5 rebounds. Kevin Love had 30 points and 15 rebounds. LeBron James had 23 points, 11 assists and 8 rebounds. He also had 8 turnovers because the Celtics are a tough, tough team. They didn’t quit, even when they got down by 20 points in the third quarter. Isaiah Thomas had 31 points and 9 assists. Jae Crowder, Avery Bradley and Marcus Smart were real physical with anyone they were guarding. Jonas Jerebko was a big spark off the bench in the fourth. He and Smart led a charge to cut the lead to as little as three points late in the fourth.

If this ends up being a playoff series, we’re in for a treat. The Cavs killed the C’s on the glass, but the boys from Beantown wreaked havoc on the perimeter and won the steals battle 15-7. Shooting numbers were pretty much even and dudes are already starting to not like each other.

Anytime you score nine points in the fourth quarter, you’re probably not going to be winning that game. That’s what did the Sixers in tonight. They gave up 30 points in the final frame to the Jazz. For the game Philly only shot 6-24 from outside and only 7-8 at the foul line. George Hill had 21 points on 8-10 shooting, along with 8 rebounds and 6 assists. Gordon Hayward and Rodney Hood each scored 20. Joel Embiid got a DNP-Rest.

Look at the Suns! They caught Toronto on the second night of a back-to-back but beating the Raptors isn’t easy no matter what. Phoenix held the Raptors to 40% shooting for the game and built a 14-point lead. Eric Bledsoe scored 22 and Devin Booker contributed 19. Both DeMar DeRozan and Kyle Lowry scored 24.

The Mavs used a steady diet of pick-and-roll and post-ups in the second half to comeback from an 11-point deficit. Deron Williams sliced through the Lakers defense on his way to 11 dimes. Wesley Matthews abused the young Lakers defenders from the midpost for his 20 points and Harrison Barnes’ 17 points came by attacking the rim. Dallas successfully slowed the Lakers down and dictated the pace. They outscored Los Angeles 31-13 in the third and by a total of 19 in the second half to come out with the win. Dirk Nowitzki didn’t play because he had to rest his ancient bucket-getting body.